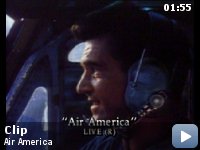 A young pilot finds himself recruited into a covert and corrupt CIA airlift organization operating in Vietnam War Era Laos.

Storyline
Air America was the CIA's private airline operating in Laos during the Vietnam War, running anything and everything from soldiers to foodstuffs for local villagers. After losing his pilot's license, Billy Covington is recruited into it, and ends up in the middle of a bunch of lunatic pilots, gun-running by his friend Gene Ryack, and opium smuggling by his own superiors.

The "golden BB" that Jack Neely talks about is a slang term referring to a single rifle shot that is so well-placed it can bring down a plane or other aircraft. Such shot is demonstrated in the opening of the film.

Continuity:
Ryack's hair during the conversation in the rain.

Gene Ryack:
The U.S. Government doesn't exist in Laos and neither does this plane!

I actually thought this film improved with each viewing – some of the
comic
lines were lost first time around, with people speaking together, and
rotor
noise from the aircraft. Air America is probably a little too
script-by-numbers, but only if you think about it too much – the key is to
just enjoy the action and the comedy. I couldn't tell whether Mel Gibson's
character was incredibly laid back, or if the actor just wasn't giving his
all – but for me, the more interesting characters were the supporting cast
anyway: David Marshall Grant as Rob Diehl and Art LaFleur as Jack Niely.
There were a few too many pilots to pad all of the cast out, but the
collective effort provided much of the humour. Robert Downey, Jnr. was
perhaps the best out of the main cast, from cheesy 'eye in the sky' pilot
('the traffic is kinda sad, kinda bumsy-looking'), to Air America rookie,
lost in a world of 'bar girls, squiggly writing on signs, and more bar
girls'. Neither Gibson or Downey, Jnr. were particularly convincing as
pilots, but luckily the planes (such as Pilatus Porters and Caribous) had
enough character to pull off the airborne scenes. Downey, Jnr.'s character
had a spectacular, if not slightly drawn out, crash-landing scene, slowly
dismantling his aircraft as he slid along an old airstrip. The soundtrack
was also a bonus, placing the film in time where the main characters were
slightly anachronistic. Frank Sinatra's 'Come Fly With Me' saved the
cliched
ending with the same droll humour that was peppered throughout the rest of
the movie. Overall, Air America is a film best watched with your brain
switched to 'idle' – although the subject is serious, the film is best as
pure entertainment.