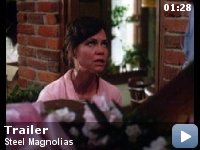 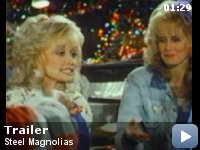 Revolving around Truvy's Beauty Parlor in a small parish in modern-day Louisiana, STEEL MAGNOLIAS is the story of a close-knit circle of friends whose lives come together there…

Storyline
Revolving around Truvy's Beauty Parlor in a small parish in modern-day Louisiana, STEEL MAGNOLIAS is the story of a close-knit circle of friends whose lives come together there. As the picture opens, we find Drum Eatenton shooting birds in the trees of his back yard in preparation for his daughter's wedding reception that afternoon. Shortly thereafter, M'Lynn and Shelby (Drum's wife and daughter) depart for Truvy's to get their hair done for the wedding. "Just the sweetest thing," Annelle Depuy Desoto (who may or may not be married because her marriage may not be legal) is introduced to Truvy's customers as her new "glamour technician." While in the chairs, the sour-tempered Ouiser Boudreaux shows up and entertains the assemblage with her barbs. It seems that the only one of the group who truly understands Ouiser is Clairee who is recently widowed and looking for a diversion…

Taglines:
Sometimes laughter is a matter of life and death.

This movie was based on a play written about a sister of Phi Mu Fraternity. Susan Harling was a member of the Kappa Iota chapter and her brother wrote the play on which the movie is based.

Continuity:
At Shelby's wedding reception, Nancy Beth sports two very different hair styles. Early on when she's dancing, it's smoothed down, but later when they are eating cake inside the house, it's quite big and curly.

Truvy:
What are your colors, Shelby?

Shelby:
My colors are "blush" and "bashful."

M'Lynn:
Her colors are "pink" and pink."

Shelby:
My colors are "blush" and "bashful" Mama!

M'Lynn:
How precious is this weddin' gonna get, I ask you?

Based On A Real Life Incident


This film is worth watching for two reasons. First, it is based on a
tragic, real life event. As such, an enhanced credibility sustains the
film's underlying premise, and thus renders a much greater potential
for viewer impact and depth of meaning, as opposed to a work of
fiction. Second, quite aside from its autobiographical roots, the film
has entertainment value, expressed mostly as snappy, funny dialogue,
delivered competently by an ensemble cast of likable actresses.
Attention to detail in costumes and production design, and adroit film
editing, further amplify the film's overall technical quality.


"Steel Magnolias" is a story about the close knit relationships between
six ordinary Southern women, living in a small town in Louisiana. The
film has a homespun, unpretentious feel to it, rather like "Fried Green
Tomatoes".

The plot alternates between humorous, small, everyday events and
good-natured quips, on the one hand … and on the other hand, the
seriousness and heartache attendant to life's unexpected crises.
Through the laughs and tears, the six women learn to endure hard times,
and thus emerge from their struggles with grace and dignity.

Finding something to criticize here is not easy. I can think of several
changes that I would have made, to satisfy my own personal preferences.
But the film is solid and substantial, as is. I suppose one could zero
in on the acting. A couple of the cast members overact their parts, at
some point or another in the film.

Overall, "Steel Magnolias" is technically well made. And the content
engages our interest, as a result of its true-to-life theme, its all
star cast, and some very clever dialogue.

TagsUSA
My Left Foot
All Dogs Go to Heaven