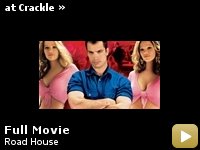 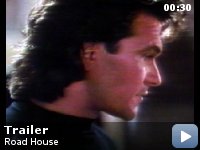 A tough bouncer is hired to tame a dirty bar.

Storyline
Dalton is the Cooler in bars; He backs up and directs the bouncers. He takes a job in a Road House that has gotten far too rough. His attempts to clean things up put him in conflict with Brad Wesley, the town bully and rich person. Things heat up.

Taglines:
The dancing's over. Now it gets dirty.

Dalton is seen doing Tai chi at one point, although he uses western boxing and mixed martial arts in all the fight scenes.

Crew or equipment visible:
When Red is reaching for the replacement antenna for Dalton, you can see a prop man handing the antenna to him (takes a few tries for Red to grab it).

Bouncer Checking IDs:
[to Frank Tilghman, as he enters the Bandstand]
Go ahead, sir.

And just think: Morgan Freeman and Miss Daisy drove away with the Oscar that year!


What brilliant trash this film is! It works absolutely every time! For
all I know it was filmed either at Uncle Ron's or El Matador here in
town!

Road House is the story of a bouncer hired to clean up a rough bar in a
tiny town. He isn't just your ordinary illiterate muscle head, though.
It's Patrick Swayze. He's got a degree in philosophy from NYU! He owns
a Mercedes! Why, he's the best damn cooler in the business! And it's a
good thing he is. This fictional town of Jasper, MO is dominated by a
slimy Boss-Hogg type played by Ben Gazzara. He and his thugs skim money
from every business in town, and the last thing they want is some
stranger waltzing on to the scene to break up their control of the
action.

Enough plot, though. Let's focus on the highlights.

This film has a script that should be bronzed or put on display at the
Smithsonian. We get monumental lines such as:

"It's good to see you!" spoken by a blind man when he first greets
Swayze.

"What do you take me for?" a bimbo asks another bar patron in an early
scene. the reply- "About a hundred dollars!"

And this film also contains the greatest line ever spoken in the
history of cinema. Decorum prohibits me from stating it verbatim, but
you'll probably know it when you hear it. It's spoken by pro wrestler
Terry Funk who plays the bouncer Swayze replaces. The line focuses on
the supposed size of Swayze's package, and the size vehicle his seed
could fill.

The film is filled with bar fights that eventually turn into shootouts,
hot women, fast cars, monster trucks, explosions, you name it. Anything
for guys who like movies is in abundance. The whole thing plays out
like a typical night on the town for us yokels here in the red states.

The film comes in surprisingly long at 114 minutes, but don't worry.
This is the type of film you can basically stop at any place, then push
play when you and your friends get back from the bars. "It will be like
you never left," as Christopher Lloyd tells Michael J. Fox at one point
in Back to the Future.

The film has more than its share of logical lapses. As Roger Ebert
points out in his review, there is no way anyone could get as rich as
Wesley by skimming this little town. It seems to only have a bar, an
auto parts store, a Ford dealership, and a cafe or two. Most of these
places get wiped out as the action unfolds. It makes you wonder who
would have been left for Wesley to skim from.

But criticism of a film like this is useless. When faced with such an
artistic statement as Road House, one can either sit back and enjoy, or
chuck the tape out the window.

The genius of Joel Silver my know no boundaries.

TagsUSA
See No Evil, Hear No Evil
Indiana Jones and the Last Crusade