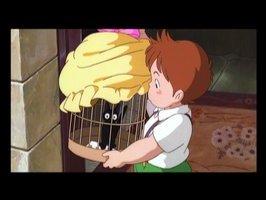 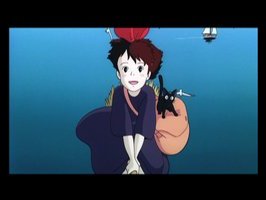 A young witch, on her mandatory year of independent life, finds fitting into a new community difficult while she supports herself by running an air courier service.

Storyline
This is the story of a young witch, named Kiki who is now thirteen years old. But she is still a little green and plenty headstrong, but also resourceful, imaginative, and determined. With her trusty wisp of a talking cat named Jiji by her side she's ready to take on the world, or at least the quaintly European seaside village she's chosen as her new home.

At first, Miyazaki was only a producer for the film. The first script was written by Nobuyuki Isshiki, and Sunao Katabuchi was scheduled to make his debut as a director. But Isshiki soon left the project, as Miyazaki wasn't satisfied with his script. Miyazaki then re-wrote the script, and eventually directed the film, with Katabuchi as an assistant director.

Incorrectly regarded as goofs:
The four-engined biplane (more precisely, sesquiplane) that Kiki sees during the opening credits is a real aircraft, the Handley-Page HP42. Eight of these planes – the first four-engined aircraft ever built – were commissioned during the 1930s; later they were converted to military use, and all were destroyed by 1941. But since this movie – according to director Hayao Miyazaki – takes place in a world where World War II never happened, it's plausible that the HP42 would still be in civilian service.

Kiki:
You know that painter that found the stuffed cat? She wants to do a picture of me.

A beautiful and introspective masterpiece


Having already been familiar with and a great admirer of some of
Miyazaki's other Ghibli films, including Princess Mononoke, I turned to
Kiki's Delivery Service on the recommendation of someone who suggested
it as "light-hearted" fun. Being an eighteen-year-old male, I didn't
think it would be much more than that—a guilty pleasure to indulge in
once in a while, something I could watch and then say, "Aw, what a cute
film!" But Kiki's Delivery Service is so much more than "light-hearted
fun." For one, it is a beautifully animated work of cinematic art, with
Miyazaki's usual flair for gorgeous landscapes and astonishing detail.
As in his recent films Princess Mononoke and Spirited Away, Miyazaki's
brush paints a beautiful world.

There is not much to be said about the plot itself: Kiki is a
13-year-old witch who has just left home to begin a year of training on
her own, and she moves to a seaside European town, befriends a husband
and wife baker, and sets up a flying delivery service.

What sets Kiki's Delivery Service apart from many of Miyazaki's other
works is the personal, rather than epic, nature of the story. It
wonderfully captures the day-to-day life of an aspiring 13-year-old
girl moving into the life of a bustling town. While there is plenty to
please the thrill-seeking adventurous spirit, the film's real beauty
lies in its ability to portray the more introverted aspects of life.
Most Western animated cinema centers around loud, pop-influenced music
and a bad-guy-fighting action-oriented plot, but Kiki's Delivery
Service has a charming and understated musical score, and lacks a
traditional antagonist. Life isn't all excitement and fighting bad
guys—something that this film seems to get across more than any Disney,
Pixar, Fox, or other Western animated film I've ever seen. In fact, the
doldrums of life are what form the heart of this film, as Kiki finds
that she begins to lose her witch's abilities and can no longer fly.

Kiki's Delivery Service is a masterpiece, one of my all-time favorite
films, and Kiki's search for the heart within herself is a tale that
adults may appreciate more than their children. Indeed, Kiki is one of
the most appealing characters that Miyazaki ever brought to life, which
is certainly saying something. One of Miyazaki's great arts is in never
talking down to his audience, and this fantastic story is no exception.