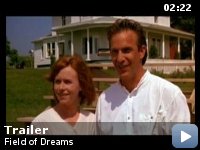 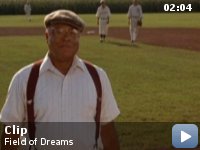 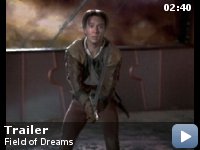 An Iowa corn farmer, hearing voices, interprets them as a command to build a baseball diamond in his fields; he does, and the Chicago Black Sox come.

Storyline
Iowa farmer Ray Kinsella hears a voice in his corn field tell him, "If you build it, he will come." He interprets this message as an instruction to build a baseball field on his farm, upon which appear the ghosts of Shoeless Joe Jackson and the other seven Chicago Black Sox players banned from the game for throwing the 1919 World Series. When the voices continue, Ray seeks out a reclusive author to help him understand the meaning of the messages and the purpose for his field.

Taglines:
All his life, Ray Kinsella was searching for his dreams. Then one day, his dreams came looking for him.

In the novel, instead of seeking fictional author Terrance Mann, Ray Kinsella seeks real-life 60s author 'J.D. Salinger. In 1947, Salinger wrote a story called "A Young Girl In 1941 With No Waist At All" featuring a character named Ray Kinsella. And in his most famous work, the novel 'The Catcher in the Rye', one of Holden Caulfield's classmates is Richard Kinsella. (In the original novel, Ray has a twin brother named Richard.)

Factual errors:
The game at Fenway Park between the Red Sox and the Athletics takes place on May 16th, because it was the only Red Sox/Athletics game at Fenway in 1988 in which Jody Reed hit first, as indicated by Ray's lineup card. The scoreboard clock says 10:32, but the actual game concluded at approximately 9:50 that night.

Ray Kinsella:
The man wrote the best books of his generation. And he was a pioneer of the Civil Rights and the anti-war movement. I mean, he made the cover of Newsweek. He knew everybody. He did everything. And he helped shape his time. I mean, the guy hung out with The Beatles! But in the end, it wasn't enough. What he missed was baseball.
[Annie looks at Ray's notes]

Annie Kinsella:
As a small boy, he had a bat named Rosebud.

Very rarely, you see a film that means one thing when your father is alive,
and another when he is dead. When I first saw this movie, my father was
still alive, we had not spoken for 8 years, and I thought, cute, but it
knows nothing about real life ! When I saw it again, he had been dead for
over a year, and I cried like a baby.

I'm English, so for me the baseball element was lost, but what did hit home
was the awareness that we are all flawed people, and the expectations we
have for our parents, are way and beyond what we achieve ourselves as we
grow older.

The film is not about baseball, it is about a second chance ! An
opportunity
to say hiya Dad, I was didn't know then, but I'm older now and understand
more about the way the world works.

In terms of the film, Cosner has never had a better role, Lancaster as Doc
Graham finally showed what a great actor he really was, and James Earl
Jones
was simply perfect.

In short a great film, James Horner's theme music is wonderful, the visuals
are fantastic, the acting is as good as you could hope to
see.

For most this is a feel good movie, for me this is a reminder that it is
never too late to make amends, I just miss my Father