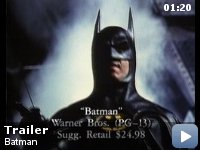 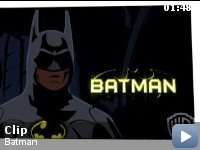 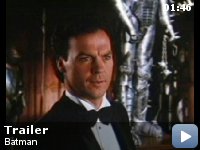 The Dark Knight of Gotham City begins his war on crime with his first major enemy being the clownishly homicidal Joker.

Storyline
Gotham City: dark, dangerous, 'protected' only by a mostly corrupt police department. Despite the best efforts of D.A. Harvey Dent and police commissioner Jim Gordon, the city becomes increasingly unsafe…until a Dark Knight arises. We all know criminals are a superstitious, cowardly lot…so his disguise must be able to strike terror into their hearts. He becomes a bat. Enter Vicky Vale, a prize-winning photo journalist who wants to uncover the secret of the mysterious "bat-man". And enter Jack Napier, one-time enforcer for Boss Grissom, horribly disfigured after a firefight in a chemical factory…who, devoid of the last vestiges of sanity, seizes control of Gotham's underworld as the psychotic, unpredictable Clown Prince of Crime…the Joker. Gotham's only hope, it seems, lies in this dark, brooding vigilante. And just how does billionaire playboy Bruce Wayne fit into all of this?

Sean Young was originally cast as Vicki Vale, but broke her collarbone while filming a horse-riding scene with Michael Keaton. The scene was subsequently written out of the script. Tim Burton suggested replacing Young with Michelle Pfeiffer but Keaton, who was in a relationship with Pfeiffer, believed it would be too awkward. She went on to portray Catwoman in
Batman Returns. Jon Peters suggested Kim Basinger and she was cast.

Continuity:
At the beginning of the movie, on the rooftop, Batman pulls out a batarang to catch the fleeing crook. The batarang is matte black, ridged, and hinged in the middle. Once it's around the crook's ankle, though, it's shiny black, smooth and all one piece.

Tourist Dad:
I'm sorry, this is my cab.

Tourist Dad:
Listen, I was here first!
[as the cab drives away]

I don't even need to say that this is the best Batman of the series. It's obvious enough.

What is all this yap about Michael Keaton as Batman? Yes, he was Batman, and
he was a GREAT Batman. He pulled off every aspect of the role perfectly – he
was better than Val Kilmer, better than George Clooney, better than
everyone. He portrayed the mysterious charm of the winged crusader just as
well as he captured the cool and collected character of Bruce Wayne. Michael
Keaton is a huge part of the reason that this film was such a huge success,
the other main portion having come from the tremendous contribution from
Jack Nicholson as the Joker. Gotham City is created in incredibly detailed
comic-book style, which adds to the overall quality of the
movie.


Director Tim Burton does an amazing job bringing this unreal world to
reality, and Kim Basinger is excellent as Vicky Vale, the film's main female
presence. The script is particularly brilliant. The role of the Joker seems
to have been written specifically for Jack Nicholson, which would not be
surprising because of how well he pulled off the role with lines like `Why
didn't anyone tell me he had one of those…things?!' and `Remember me? When
you dropped me into that vat of chemicals? That wasn't easy to get over, and
don't think that I didn't try.' And, of course, my favorite, `…we'll be like
Beauty and the Beast. Of course, if anyone else ever calls you beast, I'll
rip their lungs out.'

Everything, from the setting in Gotham City to the characters costumes to
the actual dialogue, gives the unreal feeling of a comic book, but the
characters are developed enough so that we understand their problems and we
care about what happens. The movie is a thrill ride from the beginning to
the end, and is enjoyable for all ages. If anyone is going to complain about
who was chosen to play Batman, there is much more room for complaint among
the film's several sequels. Keaton did a spectacular job that no one has
ever even come close to.