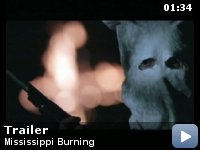 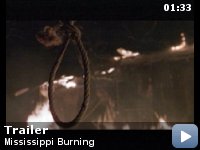 Two FBI agents with wildly different styles arrive in Mississippi to investigate the disappearance of some civil rights activists.

Storyline
Two FBI agents investigating the murder of civil rights workers during the 60s seek to breach the conspiracy of silence in a small Southern town where segregation divides black and white. The younger agent trained in FBI school runs up against the small town ways of his former Sheriff partner.

Taglines:
1964. When America was at war with itself.

During filming of rednecks-vs-reporters scenes on a bridge over the Big Black River near Bovina, Mississippi, two extras were nearly killed by a train when they ventured from a holding area onto a tall concrete-arch railroad bridge. They narrowly escaped injury by huddling on a tiny pedestal on the bridge's edge.

Continuity:
During the opening chase, the flashing light on the roof of the police car disappears and reappears several times.

Passenger:
What is it?

Passenger:
[seeing the car behind them]
What do they want?

Driver:
I don't know… just pass me… pass me…

Driver:
[trying to identify the following car]
Is it a cop?

Passenger:
I can't see.
[they are hit from behind]

Driver:
What the fuck are these jokers playin' at?

Rear passenger:
Oh, they ain't playin', you better believe it.
[they are hit again]

Passenger:
What're we gonna do?

Passenger:
There's a truck, too.
[the car behind them turns on its roof light]

Driver:
OK, sit tight, you guys. Don't say anything; let me talk… All right? We'll be all right; just relax.

Where does hatred come from?

Where? Where does racism come from? How can one race feel superior to
another? Are we born with it? No. Do we become it on our own? Maybe? Or
is it perhaps that we are taught it? There is a small scene in Mississippi
Burning that is just as powerful as any Gene Hackman speech or any violent
montage to gospel music that is in this film. There is a rally at a park
with the head of the KKK ( without his hood ) telling thousands of people
that have gathered that he loves being white. He loves the fact that
Mississippi is segregated. And in the crowd the camera pans across and
shows three year old kids smiling and cheering as gleefully and loudly as
their parent's are. It is haunting.

This film is bit like JFK in a way. It is not an absolute recreation of the
events that took place in 1964, but it is a film that tells a true story and
then adds a bit of fiction to make it more interesting for a mass audience.
For example, the case was not cracked by Mr. Anderson fooling around with
Pell's wife. But that is besides the point, the point being that this film
is mesmerizing. Everything from its direction, cinematography, acting,
writing and music, it is the best film of 1988. And having Rain Man take
most of the major awards is really quite sad. Because Mississippi Burning
is much more ambitious, important and well done. Rain Man is a very good
film and I will even go as far as to say that Hoffman is the only one that
deserved to win best actor just as much as Hackman did. But 1988 was a bad
year for the rest of the Oscars. Anyway…

I have been edgy before. Boyz and the Hood did that to me, but this film
makes me angry. It makes me want to jump back into 1964 and try to do
something to stop this. The film is that strong at showing us how terrible
and pointless racism is. And in order to make this film work, there has to
be strong elements in all areas. But for me, what really made me feel the
things that I did is the actors that played their roles.

Hackman is brilliant. He gives the performance of a lifetime and it is his
anger that gives him his edge. He sees things differently than Mr. Ward
does and that sometimes makes them bump heads with each other. But they
ultimately have the same goal in mind. Just different ways of achieving
that goal. Dafoe is great as well, but it is the supporting cast that
really makes this film. From Dourif to R. Lee Ermey to Stephen Tobolwolski,
these characters are richly portrayed by the actors that play them. There
is however one actor in particular that I wanted to touch on and that is
Michael Rooker. He plays Frank, the nastiest, meanest, no conscience, negro
hating person that I think I have ever seen on film. I don't know where his
anger comes from, but he is the kind of character that you can imagine had a
violent father that drank too much and always told stories about how bad the
black man was. When Rooker is on screen you listen. You pay attention to
what he is saying and doing. And my hatred of him was one of my favourite
parts of the film.

Mississippi Burning shows us how strange people are when it comes to racism.
The characters in this film don't know why they hate the way they do, they
just know that they do. And they are powerless to stop themselves. What
happened to the three civil rights workers was a disgrace and a tragedy.
But not just because three boys were murdered, but because no one knows why
they were murdered,besides racism that is. Why did they have to die?
Because they were a different colour of skin? Because they were Jewish? It
really doesn't make any sense.

Mississippi Burning is one of the best films I have ever seen. It is
important and it is entertaining. If you haven't seen it, do so just for
the scene with Mr. Anderson and Deputy Pell at the barber shop. That is
worth the price of the rental alone. But for a really important film that
has something to say, this is one of the best.