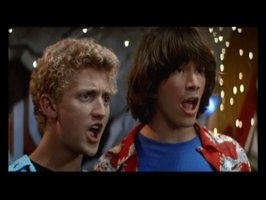 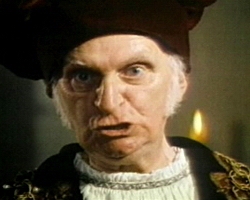 Two seemingly dumb teens struggle to prepare a historical presentation with the help of a time machine.

Storyline
In the small town of San Dimas, a few miles away from Los Angeles, there are two nearly brain dead teenage boys going by the names of Bill S, Preston ESQ. and Ted Theodore Logan, they have a dream together of starting their own rock and roll band called the "Wyld Stallyns". Unfortunately, they are still in high school and on the verge of failing out of their school as well, and if they do not pass their upcoming history report, they will be separated as a result of Ted's father sending him to military school. But, what Bill and Ted do not know is that they must stay together to save the future. So, a man from the future named Rufus came to help them pass their report. So, both Bill and Ted decided to gather up historical figures which they need for their report. They are hoping that this will help them pass their report so they can stay together.

Taglines:
The funniest comedy in the history of history.

When Bill reads the assignment to Ted, he says, "Express to the class how an important historical figure from each of your time periods would view the world of San Dimas, 1988." His lips are actually saying, "San Dimas, 1987" and the "1988" was dubbed later because of a delay in the movie's release.

Revealing mistakes:
When Socrates pushes a British knight off the horse-drawn wagon during the escape to the phone booth, it's quite obviously a stunt double, most notably by the man's face.

Rufus:
Hi, welcome to the future. San Dimas, California, 2688. And I'm telling you it's great here. The air is clean, the water's clean, even the dirt, it's clean. Bowling averages are way up, mini-golf scores are way down. And we have more excellent water slides than any other planet we communicate with…

Probably one of the most intelligently written screenplays of alltime.

Any idiot can sit down and spend four or seven years of his life writing out
his "masterpiece." You do some research, you do some hard work, you get a
little help from friends and family, and you get it done. But, it takes a
true writing genius (or geniuses, in this case) to create something as
original as "Bill & Ted's Excellent Adventure." The ingenuity of the movie
can even be seen in its delightful tagline: "History is about to be
re-written by two guys who can't spell." This tagline is both simple and
clever, while being both corny and slightly comical. Like "Real Genius,"
this film utilizes ideas from both the highest form of screenwriting while
still delving into the lowest common denominator, somehow doing both at the
same time. For instance, to perfectly grasp the concept of Bill and Ted's
"lingo," one would truly have to stoop to the lowest rung of the
intelligence level. But, with such ingenius ideas as having Bill and Ted
meet each other in the beginning of the film, then later finding themselves,
allowing the audience to gain insight on what happened in the past is just a
stroke of cinematic brilliance. And the running gag about "when the Mongols
conquered China" was one of the many cherries on the cake. Even some of the
background comments (after being told he's "too tall, man" making the phone
booth even more crowded, Lincoln responds: "That's how I'm built.") Any
movie where Genghis Kahn is tempted to come into a phone booth by a Twinkie
has to be something special. If only production companies and filmmakers
would take a chance on something as original as a time travelling phone
booth carrying two idiots on the course to better the future, the public
could finally go back to watching movies in theaters again.