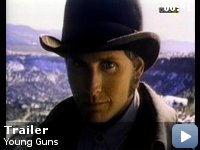 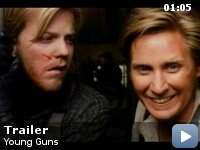 A group of young gunmen, led by Billy the Kid, become deputies to avenge the murder of the rancher who became their benefactor. But when Billy takes their authority too far, they become the hunted.

Storyline
1878 in New Mexico: John Tunstall picks up young gun men from the road to have them work on his ranch, but also to teach them reading and to civilize them. However he's a thorn in the side of the rich rancher Murphy, as he's a competitor in selling cattle. One day he's shot by Murphy's men. Judge Wilson can't do anything, since Sheriff Brady is one of Murphy's men. But attorney Alex persuades him to constitute Tunstall's young friends to Deputies and give them warrants of arrest for the murderers. Instead of arresting them, William Bonney just shoots them down. Soon the 5 guys become famous and William gets the name "Billie the Kid" – but they're also chased by dozens of Murphy's men and the army. The people however honor him as fighter for justice.

Taglines:
Six reasons why the west was wild.

It is widely believed that Billy the Kid's real name was William H. Bonney. However, the film is correct in listing that as only one of his aliases, and giving his real name as Henry McCarty.

Revealing mistakes:
In the beginning of the movie when Billy is first taken in to the ranch it appears he's getting ready to shoot a pig. As he's taking aim you can see the sun shining through the barrel from behind him making it obvious that the gun is not loaded.

[Steve is laughing at Bonney at the dinner table]

John Tunstall:
What do you find funny, Steven? That's no proper table manners.

Charley Bowdre:
He's got a way with hogs.

John Tunstall:
Congratulations, Charles. You and Steven will be doing the dirty crockery alone this evening.

John Tunstall:
And to William, both of you.

Charley Bowdre:
Apologies, Billy. We was just hacking on you.

"Dirty Steve" Stephens:
Yeah, we was just hacking on you.

Richard Brewer:
Rumor has it you killed a man, Billy. You don't seem like the killing sort.


Kiefer Sutherland, Charlie Sheen, Emilo Estevez and Lou Diamond
Phillips star in this light weight western, re-telling of the Billy The
Kid story. This movie plays fast and loose with history and is in not
particularly accurate about most details but as an enjoyable western
adventure it succeeds. The movies style harks back to the old days of
the western adventure such as Rio Bravo etc and while nowhere near it
in terms of class it is a worthwhile watch. Jack Palance makes a
fantastic bad guy and Terranc Stamp puts in a good performance as the
gangs father figure. Performances of the brat pack are pretty good and
I really enjoyed Estevez's portrayal of the kid. If you like westerns
and enjoyed modern versions such as Tombstone you'll enjoy this movie.

7/10 – Not exactly Unforgiven or Rio Bravo but still a worthwhile watch
for any western fan.