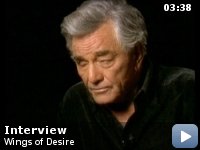 An angel tires of overseeing human activity and wishes to become human when he falls in love with a mortal.

Storyline
This Wim Wenders film centers around the story of two angels wandering in a mixture of post-war and modern Berlin. Invisible to humans, they nevertheless give their help and comfort to all the lonely and depressed souls they meet. Finally, after many centuries, one of the angels becomes unhappy with his immortal state and wishes to become human in order to experience the joys of everyday life. He meets a circus acrobat and finds in her the fufillment of all his mortal desires. He also discovers that he is not alone in making this cross over, and that a purely spiritual experience is not enough to satisfy anyone.

Taglines:
There are angels on the streets of Berlin.

Revealing mistakes:
During the scene at the snack cart, Peter Falk let his cigarette drop from his fingers without appearing to notice.

One of the greatest movies of the late 20th century

There are so many comments written about this movie, I almost don't
want to write anything – but here I am anyway 🙂

Though everyone is entitled to their own opinion, it disturbs me to
read negative comments that WOD is 'too slow' or that Wenders should
have been a still life photographer. I think that some people are
missing the point of this movie. Wenders filmed this after having been
part of the Hollywood machine for several years, and had grown sick of
the cookie cutter films that were (and still are) being made in that
tradition to produce ticket sales. Yes, this movie doesn't have loads
of action and car chase scenes and guns and sex. It does offer some
interesting perspectives. The consistent third person view and
'objectification' of the viewer is one aspect. Watching WOD, you don't
feel the typical draw into the movie as so often is the case, but
rather are a bystander, looking through a window, with your own
thoughts and ideas a part of the movie, not the other way around. WOD
doesn't allow you to become a subjective part of the film; it 'pushes'
you away from empathizing. Even the camera angles and shots motivate
this sentiment. The goal and direction of the film are presented
without struggle or thought; you know that Damiel wants to be with
Marion. He tells Cassiel this, and the only question is – how will he
achieve this goal?


WOD belies a sense of traditional film-making. Peter Falk is presented
as perhaps the 'idea' of history as fans call out 'Colombo!' The angels
are bound to Berlin, existing in a purgatory neither heaven or hell,
unable to communicate. The trapeze artist from a traveling circus
representing freedom – not only freedom from an everyday lifestyle, but
also the key to Damiel's freedom. This movie contains so many
interesting ideas and perspectives, that when watched with an open,
curious mind, it is fascinating, mesmerizing, calming and
inspirational. Filmed entirely in Berlin, the city is not a traditional
definition of beautiful. But the industrial, modernist, post WW II
reconstructed Berlin is stunning and diverse, providing the perfect
background for this modern classic. I cannot recommend this movie
enough. But please watch it with open eyes. In the same sense you
cannot listen to the music of Schoenberg or Stravinsky as you would
Mozart, you cannot watch Wings of Desire as you would a Spielberg
movie.