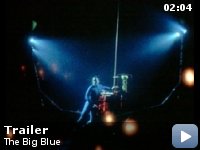 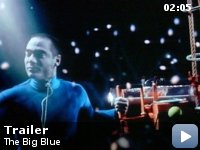 Enzo and Jacques have known each other for a long time. Their friendship started in their childhood days in the Mediterranean…

Storyline
Enzo and Jacques have known each other for a long time. Their friendship started in their childhood days in the Mediterranean. They were not real friends in these days, but there was something they both loved and used to do the whole day long: diving. One day Jacques' father, who was a diver too, died in the Mediterranean sea. After that incident Enzo and Jacques lost contact. After several years, Enzo and Jacques had grown up, Johanna, a young clerk in a security office, has to go to Peru. There she meets Jacques who works for a group of scientists. He dives for some minutes into ice-cold water and the scientists monitor his physical state that is more like a dolphin's than a human's. Johanna can not believe what she sees and gets very interested in Jacques but she's unable to get acquainted with him. Some weeks later, back in her office, she notices a championship for divers that is supposed to take place in Taormina…

Taglines:
The sea has a secret. [Australian poster]

Although the story is fiction, it is inspired by the lives of divers Jacques Mayol and Enzo Maiorca.

Revealing mistakes:
Enzo would have very marked lines on his face from "mask squeeze" from going to those depths at the end, when Jacque is holding him.

[Enzo pulls out a whiskey flask in a diving bell]

Enzo:
Hey, do you have any more complaints? Just make a list and we'll stick it on the porthole, OK?

The best special effect of " Big Blue " is its freedom.

This is the movie of my life !

I never before saw a film that i could identify myself so much
with.
I´m lucky enough to live in a place near the sea very
similar and as beautiful as those in the movie and the opening scenes
always
remind me of my teenage years and the waters i explored like young Jaqques
Mayol does in the beginning of the movie. Things that i still do. So i
immediatley related to the character and its love for the
ocean.

I guess that´s the beauty of this movie. It makes us feel that we could be
any of its characters, because they´re so real. We almost can´t believe
that
they don´t exist outside of the movie.
This is an amazing ,beautifuly well written ,acted, photographed and
directed
movie !
It carries us into an extraordinary world, and it´s our world
!!
(mine at least to some point)
Not some hollywood depiction of reality !

But what it´s about it ?
This is the worst thing anyone can ask about this movie.

I would hate to be the guy who had to publicize this in
USA.
And i can see why it failed there.

But what can i say about it?…
That it´s the story of two friends who compete to find out
who´s
best ?…It´s more than that !
That it´s a love story ? It goes beyond every love story
!
That it´s an adventure ? You bet it is ! But it has no action, no
chases,no
dangerous cliffangers, no guns and no explosions.
It doesn´t even has bad guys !
Or good guys in fact.
That it´s a travel or a road movie ? Probably. This movie has better
locations than any James Bond movie will ever get and they´re all real !

But they don´t matter much compared to the characters in the
film.
The characters then…
There´s a hero right ?… Well there´s two of them. Two
men.
But they´re not heroes.

Probably the hero is a woman who sacrifices her happiness for
love.
So, there´s a woman and two men.
There´s got to be a love triangle there to cause all those love story
rivalary subplots, right ?
Well, there´s a love triangle, but there aren´t subplots attached to
it.
In fact the love triangle has more than three people.
All characters are a part of it realy. Including dolphins ! Even the
ocean.

It´s a comedy then…
You´ll laugh, but you´ll cry too.
It´s a drama …
Not in the conventional cliché way. Not at all.
A dramatic comedy…
Nope !

It´s a sci-fi film !…
Well there´s scientists in it, and deep underwater, and even under ice
diving scenes, but it´s not a scifi film, although the American "version"
Movie Trailler presented it like if it were some new esotheric adventure
underwater sci-fi horror movie, when in fact it is not.

So what is this movie about ?!!

It´s about what you want it to be. About what you´re feeling.
It´s that open. You just have to feel it.

As Luc Besson said in an interview, at some point in the movie he was
stuck,
because he didn´t know how to carry the audience inside.

Then the real Jaqques Mayol, who worked in the film as a diving and story
consultant took Besson diving with him one day and made him experience the
sea in his way. Then Besson understood that he didn´t had to explain
anything to the audience. He just had to make people feel what it was like
!

And boy, did he make it !
The atmosphere in this movie goes beyond words.
It has to be felt !
Also the soundtrack is out of this world and trully magical.

To me this film is about love, but in a much deeper meaning than the
usual.
Beyond race, beyond gender, beyond sex, beyond nationality. Love as an
emotion.
And about freedom !

So get a wide screen TV and a full blast surround. This movie is the
reason
to buy one if you don´t have it!
Believe me !
And watch it in the dark.

Try to get the european full version of the movie.
The american is not that terrible, the feeling is there, but it´s diferent
from the original.

This movie is a masterpiece ! ( in any version )