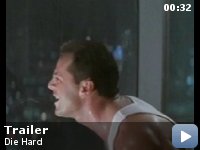 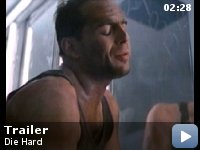 New York cop John McClane gives terrorists a dose of their own medicine as they hold hostages in an LA office building.

Storyline
New York City Detective John McClane has just arrived in Los Angeles to spend Christmas with his wife. Unfortunatly, it is not going to be a Merry Christmas for everyone. A group of terrorists, led by Hans Gruber is holding everyone in the Nakatomi Plaza building hostage. With no way of anyone getting in or out, it's up to McClane to stop them all. All 12!

Taglines:
High above the city of L.A. a team of terrorists has seized a building, taken hostages and declared war. One man has managed to escape. An off-duty cop hiding somewhere inside. He's alone, tired… and the only chance anyone has got.

Richard Gere was considered for the role of John McClane.

Continuity:
When John first enters the lobby of the Nakatomi building, the Christmas tree is unlit, even though it's Christmas Eve and the company party is in progress upstairs. When Hans and the other terrorists enter the lobby just a few minutes later, the tree lights are on.

John McClane:
What gives you that idea?

Businessman:
You wanna know the secret to surviving air travel? After you get where you're going, take off your shoes and your socks then walk around on the rug bare foot and make fists with your toes.

John McClane:
Fists with your toes?

Businessman:
I know, I know, it sounds crazy. Trust me, I've been doing it for nine years. Yes sir, better than a shower and a hot cup of coffee.

John McClane:
It's okay, I'm a cop. Trust me, I've been doing this for eleven years.

"Die Hard" is the prototype type for the modern action film. Since it's
also one of the best action films ever made, that happens to be a very
good
thing. "Die Hard" is lean, mean, and doesn't contain a single second of
wasted screen time. The direction, the action, the story, the acting . . .
every aspect of this film comes close to big-budget action movie
perfection.
Since "Die Hard" was first released in 1988, it's difficult to think of a
blockbuster action film that doesn't follow the basic structure and format
of "Die Hard" . . . or, for that matter, is better than "Die Hard".

"Die Hard" is about John McClane (Bruce Willis, in one of his all-time
best
film performances), a basically good, honest New York cop with a penchant
for annoying authority figures. Traveling to Los Angeles in a last ditch
attempt to patch things up with his estranged wife Holly (Bonnie Bedelia),
John McClane suddenly finds himself involved in a hostage situation.
Terrorists, led by the enigmatic Hans Gruber (Alan Rickman), have taken
over
the office building in which Holly is working, and with Gruber holding the
upper hand over the LAPD and FBI forces in Los Angeles, it's up to John
McClane to save the day . . . .

Kudos should be given to both director John McTiernan and screenwriters
Jeb
Stuart and Steven DeSouza — the film is tight, electrifying, and clever,
which is something few action films can ever claim. The story isn't
completely believable, but it's believable enough, and it manages to move
along at a quick enough pace to where the most glaring plotholes can
easily
be glossed over. There's also enough twists and wrinkles thrown into the
story to keep the audience guessing as to what's going to happen next . .
.
and the surprises don't come out of left field, but are actually clever
and
well thought-out. (The fact that McClane often relies on his brains
instead
of his bullets to get out of his predicaments is also a big plus.) Simply
put, "Die Hard" is one of the smartest and savviest action screenplays
ever
written. McTiernan holds up his end of the film admirably as well — he
uses the claustrophobic nature of the office building to great effect
(particularly in any scene involving an elevator shaft), and he keeps the
film rolling at a rollercoaster pace, building up the anticipation of the
audience before unleashing the action. A lot of recent action films just
fly along at a mindless, breakneck pace, without ever allowing the story
to
breathe or the suspense to build . . . unlike those films, "Die Hard"
knows
how to maximize the impact of each and every scene, and that's why it
stands
out so clearly from them all. With "Die Hard", John McTiernan puts on a
perfect clinic as to how to pace an action movie.

As for the acting, it's darn near close to perfect. Bruce Willis is
awesome
as John McClane. As played by Willis, McClane's a smartass with a
distinct
disdain for being given orders . . . but McClane's also clever, and knows
how to keep cool under pressure. There's more to McClane than the
stereotypical tough guy hero. Fortunately, the role was given to Bruce
Willis, who infuses McClane with the perfect mix of cocky arrogance and
stone-cold heroism. The fact that Willis plays McClane as a man often in
disbelief of his own situation, and who struggles in his fight against bad
guys instead of just killing bad guys with ease, like most stereotypical
action heroes — well, not only does it make the character much more
believable, it's darn brilliant. (The fact that Willis also knows how to
deliver a deadpan one-liner better than anybody else in Hollywood makes
the
character all the better.) There's only a handful of movies where both
character and actor are a completely perfect match; Bruce Willis as John
McClane is one such perfect match.

Also worthy of mention is Alan Rickman's performance as the villain Hans
Gruber. The Machiavellian Gruber would've been an easy villain to turn
into
little more than a scenery-chewing Bond villain . . . fortunately, Rickman
doesn't travel the easy route. Gruber, as played by Rickman, is cold and
calculating, and actually acts smart, instead of merely claiming to be
smart
and then being thoroughly outwitted by the hero. He always appears to
have
an ace hidden up his sleeve, and is so convincing at giving this
impression,
it's hard to tell throughout the film whether he or McClane truly have the
upper hand. Other actors probably could've played Gruber fairly well, but
Rickman makes Gruber one of the all-time great villains. As for the rest
of
the cast, they're all pretty good. Bonnie Bedelia does a nice job as
John's
soon-to-be-ex-wife Holly — she plays her with enough smarts and
feistiness
to break the usual "damsel in distress" mold. It's also worth mentioning
that Paul Gleason, who plays the obstinate police chief Robinson, pretty
much sets up the modern action movie stereotype of the authority figure
who
refuses to heed the advice of the maverick hero. The character is stupid
to
a fault, and he's wonderful because of it.

"Die Hard" is a terrific example of what happens when all the pieces of a
film fall together perfectly. There simply are no weak spots or dull
moments in the film. Is "Die Hard" one of the best overall movies ever
made? Probably not. But it's undeniably one of the best action movies
ever
made, and it just might well be the perfect modern action film. Grade:
A