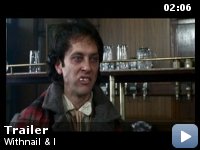 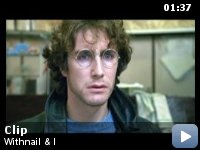 Storyline
London 1969 – two 'resting' (unemployed and unemployable) actors, Withnail and Marwood, fed up with damp, cold, piles of washing-up, mad drug dealers and psychotic Irishmen, decide to leave their squalid Camden flat for an idyllic holiday in the countryside, courtesy of Withnail's uncle Monty's country cottage. But when they get there, it rains non-stop, there's no food, and their basic survival skills turn out to be somewhat limited. Matters are not helped by the arrival of Uncle Monty, who shows an uncomfortably keen interest in Marwood…

Taglines:
If you don't remember the sixties, don't worry – neither did they.

Both Paul McGann and Richard E. Grant went on to play Doctor Who. McGann was the 8th Doctor and Grant was the 9th (in the 2003 animated webcast
Doctor Who: Scream of the Shalka), though his status was changed to "unofficial" when the new series of Doctor Who started in 2005. He also played an incarnation of the Doctor in the Comic Relief skit
Comic Relief: Doctor Who – The Curse of Fatal Death. Coincidentally, Richard Griffiths was once strongly considered to succeed 7th Doctor Sylvester McCoy, but this was never realised after the series was cancelled in 1989 and McCoy's Doctor later regenerated into Paul McGann's in the 1996 TV movie. Griffiths had also previously been considered to succeed 4th Doctor Tom Baker in 1981.

Continuity:
As the boys are driving OUT of London there is a light blue Ford Transit van. It is also there when they are driving BACK to London at the end of the film. Same number plate as well.

Withnail:
I will say one thing for Monty, he keeps a sensational cellar!

British film-making at its best.


Camden, 1969. Two unemployed actors, Withnail (Richard E Grant), and I
(Paul McGann), are facing up to the reality of an empty wine cellar and
a harsh comedown following a speed binge. Squalid living conditions and
the prospect of life on the poverty line leads 'I' (otherwise known as
Marwood), to suggest a rejuvenating break in the Lake District. After
Withnail manages to persuade his bizarre uncle, Monty (Richard
Griffiths) to part with the keys of his dilapidated cottage, the take
the Jag north for a taste of country life.

Adapting to such an alien environment is an initial challenge to the
highly strung Withnail; his predicament is significantly worsened
following an altercation with poacher Jake (Michael Elphick).
Meanwhile, Marwood is forced to concentrate his attentions to fending
off the advances of the lecherous Monty, who has inconveniently come to
stay.

Following an awkward evening, the pair hurriedly return to London and,
after a run-in with the Metropolitan Police, return to find Danny
(Ralph Brown) has made himself at home. Drugged rodents fill the oven
while Presuming Ed fills the bath and Marwood is rescued from the mire
– it seems he will crack the boards after all. "Congratulations",
Withnail says emptily, as he begins to contemplate life without his
straight man.

Bruce Robinson deserves high praise for creating a rich, debauched
world of weird thumbs, phenodihydrochloride benelex, old suits,
uncontaminated urine and the Camberwell carrot. WIth a the tightest of
budgets, he brings the late 1960's to life. The script is incredibly
witty and eminently quotable. Both Mary Selway (casting director) and
Bruce Robinson succeeded in bringing dialogue to life with an
impeccable choice of actors. Richard E Grant has never come close to
his performance as Withnail – his drunken performances are remarkable.
Richard Griffiths is as camp as a hat as the overbearing, exuberant
Monty, and Ralph Brown is frequently hilarious as the dangerous but
lovable Danny.

This is a film that will never be tarnished by age, and neither is it
limited by repeat viewings. It is a very accessible film, despite its
largely English humour, and 'Withnail' remains one of the best films
about friendship. Certainly a one off, 'Withnail' is a must see film
that will not disappoint.