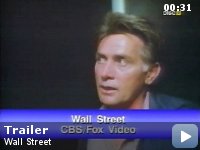 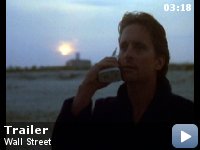 A young and impatient stockbroker is willing to do anything to get to the top, including trading on illegal inside information taken through a ruthless and greedy corporate raider who takes the youth under his wing.

Storyline
Bud Fox is a Wall Street stockbroker in early 1980's New York with a strong desire to get to the top. Working for his firm during the day, he spends his spare time working an on angle with the high-powered, extremely successful (but ruthless and greedy) broker Gordon Gekko. Fox finally meets with Gekko, who takes the youth under his wing and explains his philosophy that "Greed is Good". Taking the advice and working closely with Gekko, Fox soon finds himself swept into a world of "yuppies", shady business deals, the "good life", fast money, and fast women; something which is at odds with his family including his estranged father and the blue-collared way Fox was brought up.

Taglines:
Every dream has a price.

Anacott Steel is the name of one of the companies that are in play. It is also the name of one of the semi-pro football teams referred to in
The Longest Yard. Besides being a fictional company, the name may also be an obscure reference to Anaconda Copper, a company invested heavily in by Groucho Marx (among other entertainers) that busted in the stock market crash of 1929.

Continuity:
The painting behind Gekko changes with reaction shots while he is negotiating with Wildman upstairs at the beach house.

Businesswoman #1:
[a crowd of businessmen stampede into an elevator]
Excuse me.

there are 2 roads, but only one bears Stone's intent

You can watch Wall Street and take it for face value. If you want to do
that, all you have to do is watch Michael Douglas, probably the most
underrated actor of the last 30 years, give his greed speech. You will be
amazed at this man's talent for delivering a performance. You can watch
Daryl Hannah give a flawless interpretation of the high priced trophy
girlfriend/wife. And you can just feel the disappointment that your father
showed you the first time you let him down when you watch Martin and
Charlie
Sheen deliver the hospital scene. The story is a classic. It is purely
timeless. The setting is as grand as the money that they are playing with.
The supporting cast is excellent (realtor, boss, traders, etc.) This film
is everything a casual movie fan needs to sit for 2 hours and be
entertained. However, if you want to look deeper into the film you will
appreciate the true intent of Mr. Stone's effort. Don't get too caught up
in the façade of tall buildings, trading stock and corporate tycoons. Wall
Street is not necessarily all that it seems. Rather, it is consistent with
Mr. Stone's clever work in the past. It seems that to a creative genius
like Stone, it is not enough to make the typical story of the kid hits it
big and suddenly crashes back to earth (see secret of my success, cocktail,
top gun, etc.) The intent of the picture may be completely different from
the actual medium chosen. Stone drops clues throughout the film. It's the
dawn of a new age, 1987. The journey from the old economy i.e. the airline
industry and paper industry to the age of information. The sun is rising
in
the east as shown in the beach scene. A quote from Stone's character Gekko
`damn I wish you could see this' is the perfect hint of what Mr. Stone is
trying to say. Oliver Stone sees the future, it is a future economy based
on information being the most powerful resource in the world. The eastern
philosophy, the greed, the self-destruction of smoking and working out.
All
these things brought Gekko down. Gekko was brought down by what? A man
with a micro tape recorder. A man armed with the medium of the new
economy,
electronic media. He was nailed by a person whom he trained to `get
information' Well, he got the information and Gekko was brought down by
the
fact that he was short sighted to it. Great movie and excellent foresight
by Mr. Stone as always. I suggest you watch it again. But, this time I
suggest that you look for the real intent of the film. In my opinion, this
is quite simply one of the best films of all time. Not only because of its
timeliness, amazing foresight (see stock market crash in October 87, and
the
rise of silicon valley and Microsoft in late 80's) and one of the best
performances by an actor period in Michael Douglas' portrayal of Gordon
Gekko.