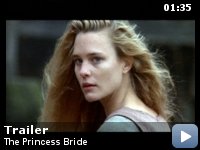 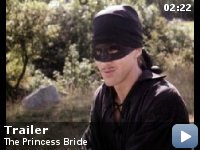 A classic fairy tale, with swordplay, giants, an evil prince, a beautiful princess, and yes, some kissing (as read by a kindly grandfather).

Storyline
A kindly grandfather sits down with his ill grandson and reads him a story. The story is one that has been passed down from father to son for generations. As the grandfather reads the story, the action comes alive. The story is a classic tale of love and adventure as the beautiful Buttercup, engaged to the odious Prince Humperdinck, is kidnapped and held against her will in order to start a war, It is up to Westley (her childhood beau, now returned as the Dread Pirate Roberts) to save her. On the way he meets a thief and his hired helpers, an accomplished swordsman and a huge, super strong giant, both of whom become Westley's companions in his quest.

(as Andre the Giant)

Continuity:
When Westley fights Inigo, Fezzik, and Vizzini and when he runs off with Buttercup, he is clearly wearing gloves. When he is pushed down the hill we see his mask and bandana come off and when we see his hands again his gloves have disappeared and he is without them for the rest of the film.

I have been waiting for the right time to review this film. I did not feel
until today that I was truly ready to say all I had to say about director
Rob Reiner's unforgettable staple of 1980s pop culture. When I first saw
The
Princess Bride, I was only 7 years old, and hardly cognizant of film as
anything but a pastime. While I remember the movie as being enjoyable, I
did
not have anywhere near as strong a liking or appreciation for it as I do
now. I certainly did not remember the film as a theater-going experience,
and recently, I got the chance to view it, on the big screen, with at
least
fifty others in attendance at a midnight screening.

Personally, I am one of those people who, by nature, absorbs memorable
quotes, and by that token, the entirety of The Princess Bride is fair
game.
As I sat there watching, I could always hear somebody, if not more than
one
person, at least whispering along with the movie under his or her breath.
Meanwhile, I noticed that there was a wide disparity of age groups. There
were pre-teens, teens, people in their twenties, thirties, and some that
looked well past forty. If the showing had not been at midnight, I do not
doubt that there would have been pre-pre-teens as well.

With a screenplay written by William Goldman (based on his book), The
Princess Bride is a classic, familiar story of a princess, her true love,
and the forces that come between them. As is evidenced by those in
attendance, this is a story for all ages. The manner in which this
fairytale
part of the story is executed by Goldman and Reiner is memorable enough to
make this a great film. As any fan of the movie will tell you, however, it
is the film's whimsical, irreverent, pervasive tongue-in-cheek antics that
make it an unqualified masterpiece.

If you hang around people who love this film, do not be surprised if they
react to unbelievable situations with the exclamation, "Inconceivable!"
Likewise, if you tell them to just wait a minute, don't be thrown aback
when
they suddenly sport a Spanish accent in saying, "I hate waiting." And if
you
suddenly, from out of nowhere, hear, "Hello.my name is Inigo Montoya.you
killed my father.prepare to die," don't worry. It's not your fault, and
you're not going to die.

While The Princess Bride has the sort of satirical edge more geared
towards
adults, the film is equally effective as a pure fairytale, and for this
reason, there is a little something for everyone. In addition, the film
enacts a self-referential tribute to the power and beauty of fairytale
stories, even in the current age in which many consider them archaic and
obsolete.

A sick grandson (Fred Savage), who is spending his time mindlessly playing
video games (of the nostalgic Atari 8-bit type), gets a visit from his
grandfather (portrayed through a wonderful performance from Peter Falk).
To
the grandson's dismay, his elder has brought a book to read to him. When
he
expresses disapproval at his grandfather's old-fashioned ways, the
grandfather's response is, "When I was your age, television was called
books." Even this quote stands out as resonant and memorable.

The grandson starts out expressing skepticism and boredom, but of course,
as
the reading of the story progresses, this gradually gives way to
captivation
and praise. Buttercup (Robin Wright, in her breakthrough role) is a
fair-haired, stunningly gorgeous maiden who has been engaged to the smug,
cowardly Humperdinck (Chris Sarandon), the prince who rules over the land
of
Florin. She of course does not love him, and she has been without joy
since
her true love, a farm boy named Wesley (Cary Elwes), was reportedly
murdered
on the seas.

Of course, without Wesley, there is no story of true love, and we know
that
he must miraculously return to her someday. This happens through an
extraordinary, and increasingly hilarious, set of circumstances. A group
of
three bandits kidnap Buttercup with the intent of killing her to
precipitate
a war between Florin and its enemy, Guilder. These three are (in order of
increasing stature) the intellectually pompous Vizzini (Wallace Shawn),
the
Spanish swordsman Inigo (Mandy Patinkin), and the big-hearted slow-witted
giant Fezzik (the late Andre the Giant, in one of the most no-brainer
casting decisions in all of film history).

During the kidnapping, however, a mysterious man in black closes in on the
trail of the three abductors, and it is this man who takes on each of the
three one by one in battles of skill, strength, smarts, and of course,
deliciously witty repartee. There is something unusually extraordinary
about
these battles, however.

With the exception of Vezzini, the abductors are not villains as we might
initially perceive them to be. The marvelously choreographed swordplay
between the man in black and Inigo, and the hilarious absurdity of the
handfight with Fezzik, are not at all about winning or losing. They embody
a
sense of honor, sportsmanship, and nobility that is rarely exemplified in
competition (both fictional and real).

Inigo, Fezzik, and the man in black do not display their skills
pretentiously or flauntingly. Instead, they take a strong sense of inner
pride in the subtle mastery of their arts. As a result, when we see them
engage in competition, there is not a sense of enmity, but a wonderful air
of camaraderie.

Also included in the mix are a sadistic count (Christopher Guest) with an
odd physical characteristic and a penchant for pain, an albino (Mel Smith)
with a stuffy throat, the deadly wrath of an R.O.U.S., and a clergyman
(Peter Cook) who makes Elmer Fudd seem eloquently spoken. Most memorable,
perhaps, is the appearance of Billy Crystal and Carol Kane as the
miracle-man Max and his wife. It has been reported that in the middle of
filming this scene, Reiner was forced to leave the set, because Crystal's
improvisations were causing him to laugh to the point of being
sick.

Regarding the film's casting, every single choice, without exception, is
absolute perfection. Cary Elwes not only easily looks the part of a
daring,
ingenious hero, but as an actor, he has an incredible gift for a subtle
mixture of drama and comedy, one that easily coincides with the film's
sensibilities. Robin Wright easily essays the role of the headstrong
princess, endlessly devoted to her love (with a convincing British accent,
despite her American origins).

For the scene of swordplay, Elwes and Patinkin had to study fencing for
months, which is impressive, but on-screen, I had no trouble believing
that
they were characters who had studied for at least several years. Despite
his
limited acting ability, wrestler Andre the Giant is perfect for the role
of
Fezzik, and something would be lost with any other actor in his place. And
of course, Wallace Shawn is endlessly amusing to watch as the diminutive,
perpetually exasperated Vezzini.

We also don't have to hear Christopher Guest and Chris Sarandon speak any
lines to know they are portraying villains. The arrogance, callousness,
and
sliminess are readily apparent in their facial and bodily
expressions.

When all is said and done, we have witnessed a wide variety of hilarity,
captivating acts of love and heroism, and of course, one of the most
satisfying acts of retribution ever put on film (one that immortalizes the
film's most famous quote and chooses just the right time and placement for
the film's sole swear word).

For someone who watches this film for the first time, and quickly catches
on
to the film's capricious mix of reverence and satire, the film is a marvel
to watch simply for the knowledge that you do not know what will come
next.
Will there be a touching moment? A reflective one? An act of bravado? Or
will our expectations be subverted in an act of comical subterfuge? The
answer: any of them will do, as the film has a delectable variety of all
of
them.

From start to finish, The Princess Bride is a transcendent, magical
experience that constantly elicits uproarious laughter and simultaneously
immerses the audience in a rich, magnificent, and almost nostalgic world
of
folklore that, after the end credits roll, seems timeless and undying. In
the years since its release in 1987, it has grown into a cult film of
legendary status, and judging by the wide variety of ages I witnessed at
the
screening (as well as the endless barrage of quoting), it seems perfectly
reasonable to assume that the film will endure for many years to
come.