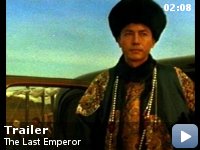 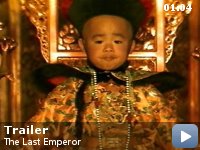 The story of the final Emperor of China.

Storyline
A dramatic history of Pu Yi, the last of the Emperors of China, from his lofty birth and brief reign in the Forbidden City, the object of worship by half a billion people; through his abdication, his decline and dissolute lifestyle; his exploitation by the invading Japanese, and finally to his obscure existence as just another peasant worker in the People's Republic.

Taglines:
He was the Lord of Ten Thousand Years, the absolute monarch of China. He was born to rule a world of ancient tradition. Nothing prepared him for our world of change.

Henry Pu-yi's younger brother, Pu Chieh, and Li Wenda, who helped Pu Yi write his autobiography, were brought in to act as advisors on the film.

Incorrectly regarded as goofs:
The tour guide at the end of the film says that Pu Yi was 3 years old at his coronation. Henry Pu-yi was born Feb. 7, 1906 and invested Nov. 14, 1908, aged 2 years 10 months. However, the guide was likely using the Chinese age system, in which a person is automatically aged "1" when born.


The Last Emperor is a truly larger than life film telling us about a
life of a human, but not just any human, the Emperor himself. He's also
not your normal emperor, he's the Last Emperor of China, his name is Pu
Yi. He lives his life however he wants to and he sort has a larger than
life persona. In just his late 20s, he stood at the throne ruling over
one of the largest nations on Earth, with the most people on Earth. He
controls and commands the lives of nearly Five-Hundred Million people.
Throughout his abdication, his decline and dissolute lifestyle; his
exploitation by the invading Japanese, and finally to his obscure
existence as just another peasant worker in the People's Republic.

While the film isn't perfect, it is certainly beautiful and a visual
treat for anyone. Bernardo Bertolucci's cinematic biography of Emperor
Pu Yi is an emotional, beautiful and astonishing film… And it's a
massive production which won 9 Oscars, It deserved every single one of
them. The film will always be remembered for its size and its beauty.
This Asian Masterpiece tells us a story of not only an Emperor, but of
a country, which was and still is the largest nation in the world. The
Last Emperor is certainly one the Largest, most beautiful films ever
created in Cinema.