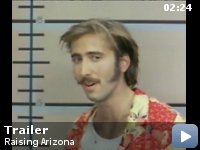 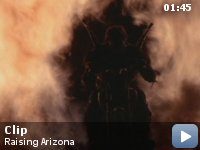 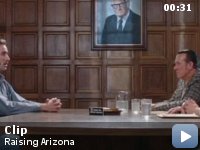 When a childless couple of an ex-con and an ex-cop decide to help themselves to one of another family's quintupelets, their lives get more complicated than they anticipated.

Storyline
Recidivist hold-up man H.I. McDonnough and police woman Edwina marry, only to discover they are unable to conceive a child. Desperate for a baby, the pair decide to kidnap one of the quintuplets of furniture tycoon Nathan Arizona. The McDonnoughs try to keep their crime secret, while friends, co-workers and a feral bounty hunter look to use Nathan Jr. for their own purposes.

Taglines:
A comedy beyond belief.

The prison counselor at the beginning of the film wears a Chai on his necklace. Chai is a Hebrew word and symbol that means "life," and is pronounced as if you were saying "hi" in English. Nicolas Cage's character "H.I." is called "Hi" throughout the film.

Factual errors:
During the wild chase scene, H.I. commandeers a pick-up with driver. The vehicle shown is a 1964 to 1966 Chevy pick up. However, there are a couple scenes from inside the cab over the hood which clearly show the vents and contours of a Dodge pick-up of similar vintage.

This is one of those surreal experiences that make you wonder whether or not
you laughed at what you saw or what you THOUGHT you had seen. Of course,
being concocted by Joel and Ethan Coen makes it even more
surreal.

As "repeat offender" H. I. McDonnough, Nicolas Cage creates yet another
strange, offbeat character that gets under your skin for days after. After
returning to the same prison time after time under the eye of Officer Ed
(Holly Hunter), he goes straight and they get married, planning to have a
big family. It is only then, he finds that Ed is a "barren, rocky place".

This is where the "Arizona" of the title comes in, when they steal one of
the quintuplets of the Arizona family. Naturally, the father (Wilson) goes
all out to find the culprits, even enlisting the aid of a "tracker" (Cobb),
who is kind of an existential bounty hunter with a good
nose.

From this deceptively simple story line, the Coens create a dreamscape that
is mesmerizing, serpentine, loaded with all matter of visual input, deft
one-liners and characters that are so off-the-wall that it's hard to forget
them and the situations they get into.

Coen Brother stalwart John Goodman plays yet another flaky loon – this time
an escaped con – who, along with his little brother (Forsythe) complain that
the prison "had no more to offer them".

Of course, the chases, fight scenes and getaway scenes are elaborate,
well-choreographed and exciting, as well as funny. How could they not be?
This whole movie is one huge snowball rolling down the side of a mountain,
growing larger and rolling faster as it reaches the end of its
trip.

But to try and explain this movie is an exercise in futility; you'd be
better off explaining Kierkegaard to a room full of second-graders. You
just have to see it yourself. If your sense of humor is a bit on the dry
side and you love fancy camera work and Fellini-esque characters, it's your
kind of movie.

Ten stars and a complimentary pack of Huggies for "Raising Arizona", the
best Dadaist head trip film with kidnapped babies, exploding bunnies and
Frances McDormand in the desert you'll ever find…that has a fight in a
trailer.