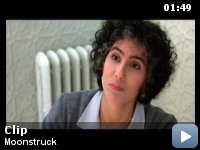 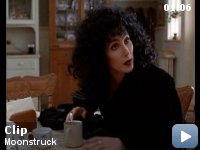 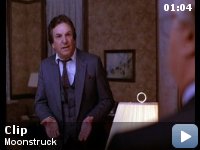 Loretta Castorini, a book keeper from Brooklyn, New York, finds herself in a difficult situation when she falls for the brother of the man she agreed to marry (the best friend of her late husband who died seven years previously).

Storyline
Loretta Castorini, a Brooklyn bookkeeper in her late 30s whose husband died several years earlier in a bus accident, decides it's time to get married again. So she accepts the proposal of a nice, middle-aged fellow named Johnny Cammareri. Loretta is convinced her first marriage was cursed because she and her husband had gotten married at City Hall; this time, she's determined to do things right, even as she admits to her mother, Rose, that she's not really in love with Johnny. (To which Rose replies: "Good. When you love them, they drive you crazy, 'cause they know they can." Rose speaks from rueful experience; she suspects, with good reason, that her husband, Cosmo, is cheating on her.) Loretta is convinced that marrying Johnny is the safe and sure thing to do – until she meets his estranged younger brother Ronny, who tends the ovens in a neighborhood bakery…

Factual errors:
Loretta says "ti amo" to her father, and he answers "ti amo." "I love you" is the accepted English translation, but "ti amo" refers only to romantic love, and would never be used between father and daughter. They would say "ti voglio bene" instead.

Cosmo Castorini:
I have no money.

Rose:
You're as rich as Roosevelt. You're just cheap, Cosmo.

People call this Cher's movie, but Olympia Dukakis makes it for me. It's
under her roof that I heard some of my favorite dialogue in the
movies.

I am not a violent person, but "Old man . . . you give those dogs another
piece of my meat and I'll kick ya til ya dead!" has got to be on my top
ten
list of memorable quotes.

I like the conversations around this family's kitchen table maybe because
growing up, meals in my house were pretty silent even though there were
seven of us. Funny that it took an Irish screenwriter to capture the
Italian cadences. These people aren't caricatures of Italians or any
other
ethnicity, they are just a vocal family.

In another time, with just a few changes in the script, this story could
have been high operatic drama. But it's not. It's a romantic comedy not
a
tragedy – even though it contains elements of tragedy – death under a bus,
a
lost limb, betrayal of marriage vows, and misinterpretations and
misunderstandings.

But these characters TALK about what's on their minds. You want to know
where the Met is located? You ask your hairdresser. You think your
husband
is flirting with another woman? You tell him that while you're both
working
behind the wine counter – in front of a customer. You're mad at your
brother, you want to know why men need more than one woman, you want your
son to pay for the wedding of his only daughter? If you really want to
know, if you really want results or answers, you speak up!

Besides movies based on Agatha Christie novels, it is rare that a story
ends
with bringing the entire cast together more satisfyingly than
"Moonstruck."
The morning-after-the-opera scene in Rose Castorini's sunny kitchen with
all the characters present is one that I can watch again and again.
"You've
got a love-bite on yer neck – your life's goin down the toilet!" "I want
you
to stop seeing her" "Who are we waiting for?" "Johnny Cammarari" "You're
a
part of the family!"

No matter what sort of table you grew up around, rent or buy this movie.

And remember, "No matter what you're gonna do you gonna die, just like
everybody else!"