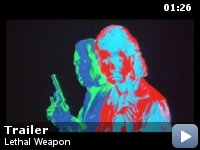 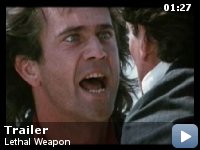 A veteran cop, Murtough, is partnered with a young homicidal cop, Riggs. Both having one thing in common, hating working in pairs. Now they must learn to work with one and other to stop a gang of drug smugglers.

Storyline
Martin Riggs is an L.A. cop with suicidal tendencies and Roger Murtaugh is the unlucky police officer with whom Riggs is assigned. Together they uncover a huge drug-smuggling operation, and as their success rate grows so does their friendship.

Taglines:
After 20 years on the force, police detective Roger Murtaugh has come face-to-face with the most dangerous killing machine in Los Angeles… his new partner.

Jackie Swanson did perform the high fall on her own. Trained by legendary stuntman Dar Robinson. Also, the stunt was done using an airbag covered with a life-size painting of the driveway and cars, which, like a foreground miniature, visually blends into the real scene. Thus, the editor is able to hold the shot until just as she makes contact with the airbag, for greater realism.

Continuity:
When Riggs jumps off the building after handcuffing himself to the jumper, a close up shot just after they step off the ledge shows that the rubber trick handcuffs break. When they get out of the air bag, they have connected real handcuffs on.

Martin Riggs:
How about it, Jack? Would you like a shot at the title?


The film opens with a panoramic aerial shot of Los Angeles, where a
beautiful blonde girl in a penthouse apartment is lying, in a sexy
white satin nightgown, on a luxurious red sofa… Drugs comes into
focus on a table next to her…


She rouses herself to sniff some white powder, steps out (completely
unbalanced) onto the balcony and stands on the railing, ready to plunge
peacefully down…

Mel Gibson is remarkable as Martin Riggs… He is talented as both a
cop and a clown… His character carries a great level of tension… He
is both charismatic and enigmatic… Riggs is a homicide detective
suffering harmful levels of stress, after losing his wife in an
automobile accident… He seems unstable… He slaps and pummels a drug
dealer in the manner of the "Three Stooges," and dares his hostage
taker to shoot him…

He is on the brink of despair… He takes out a bullet, loads it in his
.9 millimeter Beretta, puts the gun into his mouth, and appears ready
to pull the trigger…

He is suicidal… He snaps a handcuff on a jumper's wrist, and snaps
the other end onto his own wrist… Then he holds up the key to the
cuffs, and flings it out into space…

He is a sharpshooter… He raises his gun and fires without blinking,
and claims that killing is "the only thing he could ever do well."

Danny Glover is at his best against an actor who can easily steal
scenes… He plays an old-fashioned detective who is obsessed about his
age, and goes by the book… We simply see him scanning, reading the
odds…

Gary Busey plays Mr. Joshua, a trained expert killer, cool as ice,
deadly calm… It's essential for him to find out how much the police
know… He tries his best to get Riggs out of the picture… His boss
the General (Mitch Ryan) is a rugged man with eyes like chips of
stone… The ruthless general thinks that it's now the precise time to
turn up the heat… He wants Murtaugh to be tortured… He kidnaps
Murtaugh's little girl, the gorgeous Rianne (Traci Wolfe) to make him
speak…

Richard Donner's 'Lethal Weapon' is one of the finest films to offer
its audience the combination of strong acting, and scenes out of
hell… It is an exciting cop drama cleverly constructed… The final
battle, where the two cops team up against the general and his
henchmen, is especially thrilling… Donner's film also skates around
the sexual implications of male bonding, but the scene in which Gibson
and Glover are captured by the crooks and tortured dramatizes male
vulnerability in a manner that became familiar in the action film…