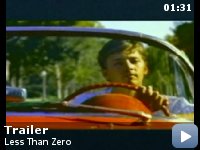 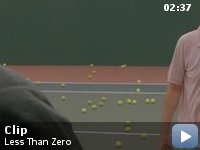 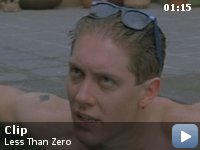 A college freshman returns to L.A. for the holidays at his ex-girlfriend's request, but discovers that his former best friend has an out-of-control drug habit.

Storyline
Clay, an eighteen-year-old freshman, comes back from his first term at a college in New Hampshire to spend his Christmas vacation with his broken-up wealthy family in Los Angeles. His former girlfriend, Blair, is now involved with his ex-best-friend, Julian. She warns Clay that Julian needs help: he is using a lot of cocaine and has huge debts. What follows is a look at the youth culture of wealthy post adolescents in Beverly Hills with a strong anti-drug message. Apart from the setting and the names, the film has very little to do with Bret Easton Ellis's book by the same title on which it was based.

Because the novel didn't have a central plot or a core set of protagonists, but was more a set of interwoven events happening to a larger group of friends, this film differs considerably from the novel. In a surreal twist, the sequel novel, 'Imperial Bedrooms', has the original novel's characters aware of the film version of "Less Than Zero".

Revealing mistakes:
In the overhead shot of the Corvette skidding through the intersection, several other sets of tire marks are clearly left from previous takes.

Clay:
Do you know that you girls have televisions between your legs?

Anyone who wants to revisit the excesses of the 80's should definitely
head
straight for this movie. Every element of it is strikingly evocative of
its
era. It has all the obvious things like the absurd fashions, the
brick-sized mobile phones, the casting (only in the 80's could a cast be
assembled so wimpy that James Spader can convince as a tough guy!), and of
course the drugs. But it also has the little touches that generate shocks
of recognition, from the pink and blue lighting, to the opening Bangles
track, to the huge banks of TV screens masquerading as interior design it
will rekindle memories you never knew you had.

Like the central characters whom it both satirises and glorifies, this
movie
is beautiful to look at and obsessed with surface and appearance. "You
don't
look happy", comments Clay (McCarthy) to Blair (Gertz) at one point, "But
do
I look good?" is her rejoinder. This film, while not a happy one,
definitely looks good. Some scenes, notably one of McCarthy swimming and
one of a swarm of motorcycles driving past him, seem to have no other
purpose in the film beyond being aesthetically pleasing. The film's
visual
imagery is indeed so striking that when the makers of The Simpsons wanted
to
include a parody musical "Kickin' It – A Musical Journey Through the Betty
Ford Clinic" they drew the leading man (playing a celebrity busted for
drug
offences) dressed in the distinctive black and white suit worn by Robert
Downey Jnr during the first party scene, presumably confident that it
would
be recognised.

But despite its emphasis on visual style, Less Than Zero does have some
substance underneath, most of it concentrated in Robert Downey Jnr's acute
portrayal of the spoilt, self-destructive anti-hero Julian. It is easy to
say with hindsight that playing a drug-addled and desperate man was never
going to be a huge stretch for Downey, and plenty of critics have done so.
However, regardless of the reasons behind it's proficiency, his
performance
has a depth and range that gives it an air of authenticity rare in a genre
of character which traditionally leads actors into either an excess of
hamminess or a glazed vacancy. Downey's Julian swings between easy-going
charm, raw vulnerability, spoilt petulance and an aggressive
unpredictability in a way which allows the audience to sympathise both
with
his family's angry hand-washing and his friend's reluctant love for him
and
determination to save him from himself.

The role is a difficult juggling act and luckily Downey has the perfect
foil
in Spader's subtle turn as the cynically manipulative dealer, Rip. The
film
really comes alive in the exchanges between the two, Julian puppy-ishly
optimistic that he can sort his problems out and Rip cruelly cutting
through
his confidence to the reveal the self-deception at its heart, chipping
away
at Julian's fragile self-esteem in order to control him.

Unfortunately, the film rather lets itself down with a closing few minutes
that seem to drag on for at least an hour. It's lazy, contrived and
unlikely ending is more of a get out clause than a culmination and appears
to have been written purely as a way of ending the film rather than as its
logical conclusion. Despite this fairly major flaw Less Than Zero is
entertaining, with enough snappy dialogue, varied music and amusingly
dressed extras to counteract its deficiencies.