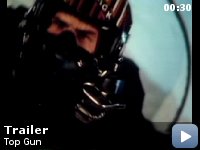 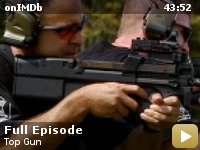 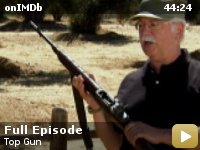 The macho students of an elite US Flying school for advanced fighter pilots compete to be best in the class, and one romances the teacher.

Storyline
Maverick is a hot pilot. When he encounters a pair of MiGs over the Persian Gulf, his wingman is clearly outflown and freaks. On almost no fuel, Maverick is able to talk him back down to the Carrier. When his wingman turns in his wings, Maverick is moved up in the standings and sent to the Top Gun Naval Flying School. There he fights the attitudes of the other pilots and an old story of his father's death in combat that killed others due to his father's error. Maverick struggles to be the best pilot, stepping on the toes of his other students and in a different way to Charlie, a civilian instructor to whom he is strongly attracted.

Taglines:
I feel the need, the need for speed.

While many terms used in the movie either match or are closely based on real terms used by naval aviators and the pilots in general, the term "going ballistic" is a real phrase that was wrongly used to describe a pilot successfully reaching maximum speed, when it actually meant that the pilot was going too slow to control of his aircraft, i.e., the aircraft is ballistic like a ball thrown in the air and will be influenced by gravity rather than the control surfaces as there is too little airflow over them. The phrase is used in Air Combat Maneuvers where the aircraft is put into a vertical or nearly-vertical climb and slows below an acceptable control speed. The pilot is then just along for the ride as gravity takes over and the airplane begins to descend and accelerate back to flying speed. The call is given over the radio to warn other pilots that the aircraft cannot maneuver to avoid a collision.

Continuity:
When Cougar is freaking out, he looks twice at his family photo. The altimeter reads 31,500 ft the first time, and *9,300 ft (the first number obscured) a second later. But he is flying straight and level.

I can't believe the reviews I have read about Top Gun being technically
inaccurate, not enough character development, an overall simple and childish
plot… gimme a freegin' break! This film was made to look cool, sound cool,
and define cool. Yeah, okay, the MiG-28s are really F-5 Tigers; I've read
the 'goofs' section before. And Tom Cruise's height. And about 'Maverick
going supersonic – I'll be there in 30 seconds,' and the laws of physics
preventing him from covering 200 or so miles from the carrier in that time.
Whatever! So what! If Top Gun had tried to be accurate and true-to-life in
every respect, it would have been some oh-so-serious flick like Courage
Under Fire. Here's some examples of what I mean:

2.5 – Russian planes are actually grey or green. The MiG 28s are black. The
Tomcats are… yeah, you guessed it… white! Good vs.
Evil.

4 – "It's too close for missiles. I'm switching to guns!" Enough
said.

5 – the generic guy carrying coffee who gets knocked over by the fuming
air-control officer. We never see him get up. Classic.

6 – even the edited TV version is a few steps above normal-cool. "… you'll
be flying a cargo plane [edit]… out of Hong Kong!"

8 – the graceful way Top Gun maintained a PG rating, without using the
F-word once.