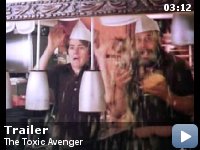 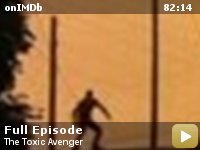 Tromaville has a monstrous new hero. The Toxic Avenger is born when mop boy Melvin Junko falls into a vat of toxic waste. Now evildoers will have a lot to lose.

Storyline
This is the story of Melvin, the Tromaville Health Club mop boy, who inadvertently and naively trusts the hedonistic, contemptuous and vain health club members, to the point of accidentally ending up in a vat of toxic waste. The devastating results then have a transmogrification effect, his alter ego is released, and the Toxic Avenger is born, to deadly and comical results. The local mop boy is now the local Superhero, the saviour of corruption, thuggish bullies and indifference. Troma classic with good make-up effects and stunts, a pleasant surprise indeed.

Taglines:
He was 98 lbs. of solid nerd until he became…

Look for future Oscar-winner Marisa Tomei as an extra (coming out of a shower).

Revealing mistakes:
During the love montage there is a scene where Toxie jokingly puts a pylon on his head and Sara laughs, Sara's character is blind.

Sara:
Why Melvin you're beautiful. You're a beautiful person. You're so muscular. It's been two years since I've touched a man.

The posterchild for the 'so bad it's good' film brigade…

Lacklustre direction by Lloyd Kaufman and Michael Herz, a goofy script (by
Joe Ritter), truly poor FX and even worse acting all add up to, for some
strange, abstract reason, a stupidly enjoyable film experience.

Maybe it's the camp sounding music, the over the top (and in some cases
*way* over the top) 'acting', or perhaps it's just the fact that it's so
unashamedly weird and downright cheesy that makes it such fun to watch, who
knows? Whatever the reason this definitely isn't a film to spend long hours
contemplating such things, instead just sit back and enjoy the crazy
show.

Performance wise, as already mentioned, none of the actors give even
remotely decent performances, with the exception of Andree Miranda who's
actually pretty good in her role as Toxie's blind girlfriend. All of the
other actors are so far over the top (or indeed just so downright terrible)
that by films end they too have somehow managed to take on their own
distinctly cheesy charm and add greatly to the whole 'so bad it's good'
motif.

As I may have mentioned once or twice before 'The Toxic Avenger' is
cheesier
than a block of cheese factories, and as such it takes a special type of
person to enjoy 'this type of thing', however for those with their tongue
planted firmly in cheek, and for lovers of schlock cinema and 50's z-grade
monster movies this is a must see. For most everyone else though it's
probably best avoided and will most likely induce headaches and annoyance
rather than belly laughs and amusement. Which of the above descriptions
best
suits you I'll leave you to decide for yourself.