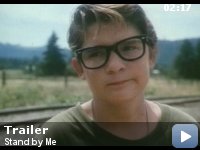 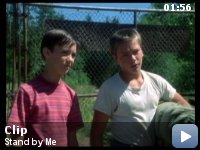 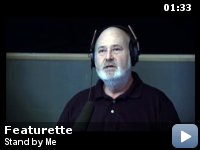 After the death of a friend, a writer recounts a boyhood journey to find the body of a missing boy.

Storyline
4 young friends set out on an adventure. Geordie, Chris, Teddy and Vern go looking for the missing body of a local teenager – found by a gang of older boys. A story of boys hangin' out and growin' up.

While practicing his lines, Jerry O'Connell was incredibly impressed that, as an 11-year old, he was being allowed to swear.

Continuity:
All four guys are in the junk-yard and they are all about to toss their coins to see who goes to get the food. When Teddy throws his coin in the air he is wearing no dog tag necklace but when he catches the coin he is suddenly wearing the dog tag necklace.

The Writer:
[voiceover]
I was 12 going on 13 the first time I saw a dead human being. It happened in the summer of 1959-a long time ago, but only if you measure in terms of years. I was living in a small town in Oregon called Castle Rock. There were only twelve hundred and eighty-one people. But to me, it was the whole world.

I find it hard to comment on this film without simply repeating what has
already been said. It's not that I can't think of anything original, but
that others seem to have felt the exact same emotions as I did when watching
this film.

I saw this movie when I was about 12, 13, maybe 14 years old. So it didn't
have the same nostalgic sense it had for so many. But what it did, was make
me ache for those memories. I wanted (in the words of another reviewer) to
be 12, and *that* cool. I wished I had been like that, that I had had
friends like that, laughed like that, and had adventures like
that.

The 'milk-money' scene was probably one of my all-time favourite scenes in
movie history. Up until I saw this movie I had never held much regard for
River Phoenix, but the poignancy and sincerity which River added to the role
of Chris Chambers touched me to the point of tears. I read in yet another
review that in this scene, River was asked to think of a time when he had
been hurt by an adult, and that even after the cameras stopped rolling,
River sat there still, sobbing and hurting. And I felt every tear and heard
every word as though I were there with Chris.

This movie made me laugh, cry, rejoice and fear with Chris, Gordie, Teddy
and Vern. I loved the campfire scenes, and today I look back on my own
childhood, and remember with a laugh the amazingly similar things I used to
laugh and wonder about with my friends. I remember dreaming about being a
writer and an actress, I remember standing up to bullies, I remember walking
or riding with my friends, I remember being afraid, and crying onto a
friend's shoulder.

I guess what this movie does for everyone, is take them back in time, even
though the situations may have been different, chances are you'll find the
similarities, and remember with a smile that yes, your life was once *that*
cool. In the words of Vern, "a great time"

I especially loved the ending. That they found out who was strong, and who
just talked tough. I loved the last scene with Chris and Gordie, and the
closing monologue.

"I never had any friends later on, like the ones I had when I was
twelve…Jesus….does anyone?"