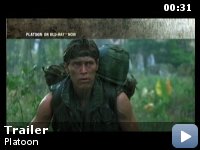 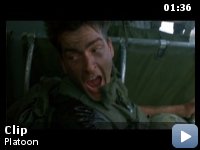 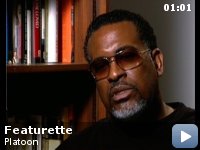 A young recruit in Vietnam faces a moral crisis when confronted with the horrors of war and the duality of man.

Storyline
Chris Taylor is a young, naive American who gives up college and volunteers for combat in Vietnam. Upon arrival, he quickly discovers that his presence is quite nonessential, and is considered insignificant to the other soldiers, as he has not fought for as long as the rest of them and felt the effects of combat. Chris has two non-commissioned officers, the ill-tempered and indestructible Staff Sergeant Robert Barnes and the more pleasant and cooperative Sergeant Elias Grodin. A line is drawn between the two NCOs and a number of men in the platoon when an illegal killing occurs during a village raid. As the war continues, Chris himself draws towards psychological meltdown. And as he struggles for survival, he soon realizes he is fighting two battles, the conflict with the enemy and the conflict between the men within his platoon.

Taglines:
The first casualty of war is innocence.

According to Oliver Stone, he intentionally cast Tom Berenger and Willem Dafoe against type (Berenger, who played the ruthless, sadistic Sgt. Barnes, was mostly famous at that point for playing good guys, while Dafoe, who had primarily played villains up until then, played the heroic, compassionate Sgt. Elias). The casting worked, and both men received Oscar nominations for their work.

Continuity:
When leaving the burning village, SSG. Barnes' left eye is black. When he and Sgt. Elias return to base camp and have a discussion with the Captain, Barnes' right eye is black.

Pvt. Gardner:
[seeing body bags]
Aw, man, is that what I think it is?

Sergeant:
All right, you cheese-dicks, welcome to the 'nam! Follow me.

Its hard to know where to start with such a breathtaking film. Oliver
Stone's Platoon is quite simply the best Vietnam war film ever made in my
opinion. Everything about it is as close to perfection as we are likely to
see. Charlie Sheen plays the lead, and Willem Defoe and Tom Berenger play
the two sergeants that form a key part of the plot.


Chris Taylor (Sheen) is torn between the sergeants. Barnes (Berenger) is the
battle hardened, brutal murderer, who uses the war as an excuse to tender to
his sadistic pleasures. Elias (Defoe) is the other side of the spectrum. We
get the sense that he has wrestled with his inner demons, but he has
successfully come through to the other side. He has compassion for his
fellow man, and he uses drugs as a form of escapism from this brutal war.
The two symbolise the struggle that Taylor must face if he is to survive out
in Vietnam.

Oliver Stone perfectly captures war. The shooting is frantic and impossible
to follow. It perfectly disorientates us, just as the soldiers were. We have
no idea who is being shot at, and neither do they. We follow the war at
ground level, and see the brutalities first hand. Having served in Vietnam,
the film is loosely based on Stone's time out there, and Taylor loosely
based on himself.

Full Metal Jacket showcases how inhumane the war was, Apocalypse Now turns
it into a story about life in general, and hopelessness, but Platoon has
everything. Trying hard to avoid the old cliché, but if you only watch one
war film, make sure it is this one. Nothing else can come close.