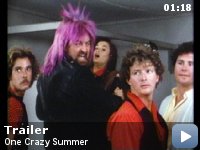 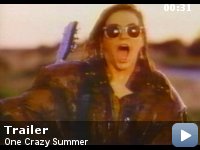 An aspiring teenage cartoonist and his friends come to the aid of a singer trying to save her family property from developers.

Storyline
With a name like Hoops McCann, he's bound to get that basketball scholarship after high school, right? Wrong! What Hoops really wants to do is write and illustrate a love story. To help him find his way, his friend George invites Hoops to come with him and his sister to spend the summer on Nantucket. The friends Crazy Summer begins when they pickup Cassandra on the way–she's being chased by a motorcycle gang. From here on in, it only gets crazier. Once on the island, Hoops and George, along with George's island friends the Stork twins and Ack-Ack (son of a marine), must help Cassandra save her grandfather's house from the greedy Beckersted Family. Along the way, Hoops must find a way to write his cartoon love story – and maybe a real one of his own.

Taglines:
They're out of school, out on Nantucket, and out of their minds. With this crowd, anything can happen!

The film is sometimes described as "'
Better Off Dead…' Goes To The Beach", as it shares the same star (John Cusack) and the same director (Savage Steve Holland), and is also about an aspiring cartoonist.

Hoops McCann:
Will you watch where you're going! We're heading for the docks!

George Calamari:
What, did you think we were driving to Nantucket? Come on, it's an island!

Hoops McCann:
You never mentioned any boats! I hate boats! I'm not getting on any boat!

George Calamari:
I beg to differ!

I have to admit that these days, I can't stand Demi Moore. It seemed almost
as soon as I 'discovered' her (and developed a squirmy adolescent crush on
her) via this film, her career went stellar, the films got worse and she
turned into just another boring megastar. Life sometimes really sucks. But
ONE CRAZY SUMMER doesn't suck. It's a very amusing and eminently likeable
teen comedy that doesn't stoop to bad taste gags or gross-out schtick for
its laughs (Farrelly brothers, take note) and relies on its very eighties
feelgood charm to win you over. I watched this one over and over again on
VHS when I was a kid, and I must've driven my parents and friends insane
with my constant cries of "Chilli dog!", "This is a love story, not a Rambo
bloodbath!", "Hi Cookie! I'm Egg…gemini!" and all those other little bits
of treasurable dialogue. The cartoon sequences are brilliant, nicely
subversive in a Ralph Bakshi – Robert Crumb way, and the cast are perfect.
Bobcat Goldthwait really turns the spastic nerd persona up HIGH here, and
one of the most killingly funny moments in his career occurs when someone
playfully throws a beachball at his head, only for him to yelp "That really
smarts, that went in my eye!" Trust me, it's so funny. I want to go to
Nantucket Island some day and find a cute rock chick who prefers shy
cartoonists to buff studs with hot cars and have a bunch of zany adventures
with some wacky friends, but until I do, I'll just watch ONE CRAZY SUMMER
again. Enjoy!