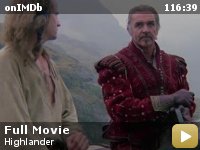 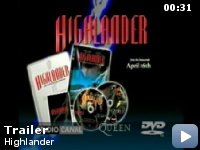 An immortal Scottish swordsman must confront the last of his immortal opponent, a murderously brutal barbarian who lusts for the fabled "Prize".

Storyline
Born in the Highlands of Scotland in 1518, Connor Macleod is immortal. When he is wounded in battle but does not die, he is banished from his village. He meets another like himself, Ramirez, who teaches him swordsmanship–the only way to kill another immortal is to take his head–and the ways of the immortals. Modern-day New York is the location of "The Gathering," where Connor and the few remaining immortals must battle to the last for "The Prize."

Taglines:
He fought his first battle on the Scottish Highlands in 1536. He will fight his greatest battle on the streets of New York City in 1986. His name is Connor MacLeod. He is immortal.

Continuity:
Speed of Sean Connery's legs moving when he runs along the beach VERY different to that of the stunt double's.

Kurgan:
Who is the woman?

Kurgan:
Ah! Not for much longer…

When I first saw this movie, I loved it. Having recently seen it again after
several years, I found it to be every bit as good as I remembered – in fact,
better. So I thought I would visit IMDB and see what others had to say. I
learned four things;

1/ This movie was a flop at the box office. Funny, I had always assumed it
was a hit – it was so good, and spawned three (soon to be four) sequels and
a television series.

2/ I expected some to be less than entranced with Highlander, but was
interested to learn that there are those who think it complete
rubbish.

3/ Some people think the sequels are good movies. How could
they?

4/ Some people don't like the Queen soundtrack. How could they
not?

It is always interesting to see different viewpoints, especially when they
are completely contrary to your own. But for me, this movie was perfect. The
premise was intriguing, the story was beautifully told, the joy and pathos
of an immortal amongst mortals revealed with great skill. There was great
action, romance, the tragedy of love lost – and the baddest of bad guys to
overcome.

The casting was excellent, as was the acting. Sean Connery's contribution
was exactly as it should have been, and no more. Clancy Brown's performance
as The Kurgan was joyfully terrifying, Christopher Lambert was
spot-on.

The screenplay was excellent, as was the script. I was especially impressed
with the way that flashbacks were interwoven with the ongoing story. In
fact, this is the only flashback movie I have ever liked.

I was also thoroughly impressed with the action sequences. Unlike so many
recent movies, none of the action involved the physically impossible (with
the obvious exception of the fact that the immortals were immortal, of
course). This added enormously to the appeal, in direct contrast to so many
movies made in the last decade. I despair when I watch movies where people
perform the impossible. Even the classic scene `Oh, I'm falling – but it's
OK, I can just grab this rope/branch/flagpole/whatever, and even though I
have fallen 30 feet and am travelling at 20 mph, I can just stretch out my
hand and arrest my fall as though I was no heavier than a feather' destroys
all credibility in the action. I know, this is a fantasy movie anyway, so
what does it matter? Well, realistic action is even more important in
fantasy movies; it helps the audience to willingly suspend disbelief. This
is very difficult to do when you are busy giggling at the latest fantastical
feat you have witnessed. No such concerns in this movie – the action was
perfectly judged to reflect the prowess gained from centuries of experience,
whilst avoiding the impossible and the ridiculous.

I was intrigued to find one user comment on IMDB criticising the use of
`unnecessarily large and heavy weapons'. Anyone who has used (or even picked
up) any edged weapon will be aware that they are very heavy. Moving that
kind of mass means lots of momentum, and involves very distinctive body
movements to counterbalance the weight. Most movies use toy weapons –
plastic, fibreglass or wood – and the lack of mass shows in the actor's
movements. For the uninitiated, this may make for flashier and faster action
– but for those who know, it looks like children playing pretend. The use of
weapons with real weight in Highlander adds tremendously to the realism. It
was particularly impressive that the actors could use the weapons properly
(at least to the extent demanded by the choreographed scenes – and that is
all that is required for movies). Clancy Brown (as The Kurgan) deserves
special praise here – he had the largest and heaviest weapon, yet wielded it
like a veteran. One can only imagine the endless hours he spent perfecting
his movements and balance.

I do understand why some would find the soundtrack intrusive, but for me
this was another area that was perfectly judged. Queen's songs enhanced the
mood of the moment whenever they played. One related fact that some might
find interesting – a few years ago I saw a list of the top ten best movies
for music as voted for by students. Highlander made the list – the only
non-musical to do so. (In fact, I think it came in the top five.) So I would
guess that the soundtrack works for most people..

I also understand why the accents in the movie (Christopher Lambert's and
Sean Connery's) are a problem for some. However, I was happy with Lambert's
accent; it was Scottish enough for the Highland scenes, and suitably
indefinable for the modern settings. Sean Connery was, of course, Sean
Connery – he never adopts any accent other than his own. But that's OK – it
doesn't detract from the film, any more than it detracts from any of his
films (such as Red October). I tend to agree with his point that accents
don't matter – emotions are the same, regardless of nationality.

Just a quick word about the sequels – disappointing. I am not one to decry
all sequels as inferior. In fact, many sequels are very good, and some are
better than their progenitors. However, the Highlander sequels were without
exception very poor. The original film was obviously conceived as a one-off,
and was all the better for it. The story was complete with Highlander, and
the sequels were necessarily contrived. However, Highlander II exceeded all
expectations in this regard. The plot changed the story of the immortals
beyond all recognition. Egregious just isn't a big enough word to describe
it.

The sequels are best viewed as being entirely separate from the original. If
you haven't already seen them, be prepared for a decidedly tepid
experience.

But Highlander itself – ah, there's a real movie. Sit back and
enjoy!