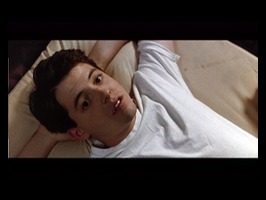 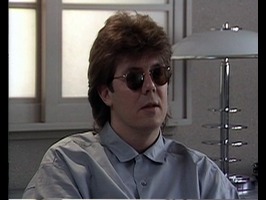 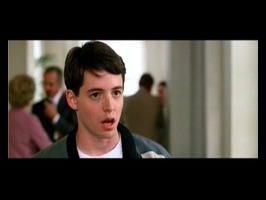 A high school wise guy is determined to have a day off from school, despite of what the principal thinks of that.

Storyline
Ferris is a street-wise kid who knows all the tricks. Today he decides to take the day off school. When Ferris takes the day off, so must his best friends, Cameron and Sloane. Cameron is reluctantly persuaded to borrow his father's Ferrari, and together they hatch a plan to get Sloane out of class. Suspicious dean of students Ed Rooney knows all about Ferris, but can never catch him. Ferris' sister Jeanie is also frustrated that Ferris always gets away with his tricks and she doesn't. Furthermore, Ferris is an 'angel' in his parents eyes. It's Ferris' day off, he's out to enjoy himself, and he does!.

Taglines:
While the rest of us were just thinking about it…Ferris borrowed a Ferrari and did it…all in a day.

Matthew Broderick improvised the scene and the line with the clarinet: "Never had ONE lesson!"

Continuity:
When Cameron is spoofing Sloan's father, Ferris calls in and Grace answers his call on line three. After Rooney speaks with Ferris, the scene cuts to a shot of his phone. Ferris is now on line two.


Before all the slapstick, before re-writing "Home Alone" umpteen times
and before selling his soul to "Disney Pictures Inc.", John Hughes was
believed to be THE scribe for teen angst.

He wrote eloquently of it in "Sixteen Candles", "The Breakfast Club"
and "Pretty in Pink". And with "Ferris Bueller's Day Off", he creates a
person and a time in life that just about anyone who's ever been a
teenager can relate to.

Who hasn't known someone like Ferris Bueller (Broderick)? Someone who
always has a plan, someone who made loafing off an art form, someone
who could fall in a barrel of you-know-what and come out smelling like
a rose?

All he wants to do is take a day off from school and enjoy the day in
Chicago – simple enough, but he must also try and convince his best
friend Cameron (Ruck) and his best girl (Sara) to join him and, in the
process, learn to enjoy what life has to offer.

Naturally, there is a tyrannical school dean (Jones) who is determined
to catch Ferris in the act of hookey and Ferris' own sister (Grey,
pre-nose job) who has it in for her brother, the "trouser-snake".

There are funny situations throughout the movie, and the characters are
ones that grow on you, especially Ruck's worry-wart portrayal of
Cameron Frye, constantly fretting about his dystalic, cursing his
father and nearly drowning in a pool, all in the name of friendship.

Sara has less to do, but she plays the object of desire well, and
Ferris' passion for her is understandable. At least he thinks about the
right things, like what their lives would be like after high school.

All the way from beginning to end, this movie is a great trip in search
of fun, relaxation, not taking life too seriously and how to sing Wayne
Newton songs in the middle of a parade.

You want to catch vintage John Hughes and classic '80s teendom at its
best? Seize this "Day"!