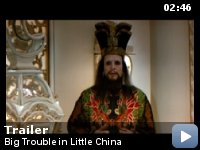 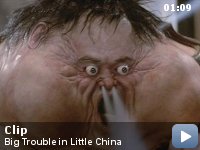 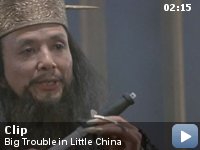 An All-American trucker gets dragged into a centuries-old mystical battle in Chinatown.

Storyline
While kung fu warriors and otherworldly spirits battle over the fate of two women, Russell's swaggering idiot manages to knock himself out or underestimate the forces he's dealing with. Jack Burton, a tough-talking, wisecracking truck driver whose hum-drum life on the road takes a sudden supernatural tailspin when his best friend's fiancee is kidnapped. Speeding to the rescue, Jack finds himself deep beneath San Francisco's Chinatown, in a murky, creature-filled world ruled by Lo Pan, a 2000-year-old magician who mercilessly presides over an empire of spirits. Dodging demons and facing baffling terrors, Jack battles his way through Lo Pan's dark domain in a full-throttle, action-riddled ride to rescue the girl.

Taglines:
Some people pick the darnedest places to start a fight!

Kurt Russell confessed on the DVD commentary that he was afraid of starring in the movie because he had made a string of movies that flopped at the box office. When he asked John Carpenter about it, he told Kurt that it didn't matter to him – he just wanted to make the movie with him.

Continuity:
In the first fight scene in the alleyway that Jack and Wang witness, the same stuntman can be seen charging, fighting, and indeed being KO'd alternately dressed as a Chang Sing, or Wing Kong.

Pinstripe lawyer:
What I'd like to do today is get your version of what happened.

Pinstripe lawyer:
Of course. First, just state your name and your occupation for the record.

Do you believe in magic?

Despite his recent slide into mediocrity, John Carpenter is responsible
for what could be termed some of the biggest cult movies of the 1980's.
Following his resounding success with Halloween he went on to direct a
number of quirky yet excellent movies that began to tail of toward the
end of the 80's with the release of such dross as Prince of Darkness.
Carpenters movies are probably some of the most under appreciated
pictures of recent cinema history on a commercial level, and none more
so than perhaps one of his finest, the delightfully absurd action movie
Big Trouble in Little China.

The plot is as daft as they come. Loud mouthed truck driver Jack Burton
(played by Carpenter's long time collaborator Kurt Russell) arrives in
San Francisco's Chinatown where he agrees to help out old friend Wang
(played by Denis Dun) by driving him to the airport to pick up his
green eyed fiancé. Things quickly go south however when a band of
street punks kidnap the girl and the motley duo set off in pursuit. The
pair soon find themselves caught in the middle of gang war that takes
on a decidedly mythical bent and are forced to flee while Jack's truck
is stolen. All this occurs within the first fifteen to twenty minutes.

If there's one thing you can say about Big Trouble, it's that it's
action packed. The plot (such as it is) moves at an incredible pace and
the film rarely slows to take breath as it rolls from one action set
piece to the next. In such movies, normally the dialogue, and
subsequently the acting suffer from a lack of any real attention. Not
so here. Carpenter balances everything so perfectly that it's a wonder
his career took such a slide. Although the actual story may be
incredibly absurd and at times suffers from some rather obvious gaps of
logic, the dialogue never fails to sparkle. Russell gives his very best
wise ass shtick as Burton, the confused have a go hero who's so out of
his depth he should really be fish bait, while Dun excels with a
character who is consistently more heroic and capable than the lead.
Another wonderful turn comes from an appearance by a young Kim Cattrall
(of Sex and the City fame) as Gracie Law, a downmarket lawyer with an
ability to talk at incredible speed. Some of the scenes between these
three are pure comic genius, as Dun and Cattrall rattle out plot
information at a rapid staccato pace while an increasingly bewildered
Russell tries desperately to keep up.

Despite such positive remarks, Big Trouble was perhaps one of
Carpenter's biggest commercial flops. While many of the movie's fans
find this difficult to understand I do not. The reason for its failure
is really incredibly simple. In terms of its style and the underlying
comedy behind the piece, Carpenter's loving part tribute, part send up
of all things Kung Fu was way ahead of the curve in every important
respect. Take the relationship between our 'hero' Jack and his
'sidekick' Wang. The true dynamic of this relationship is a wonderfully
post modern slant on the cliché buddy dynamic that existed in the 80's
and it was done long before post modernist humour became truly
fashionable in films (the most obvious example of post modern piece of
cinema being Scream). Despite receiving star billing, Russell's Jack is
actually a sidekick to Wang. While Wang has the knowledge, the skill
and the courage to make him a true classic hero figure, Jack lags
behind, being brash, ignorant and of little actual use in a fight.
Similarly the action, although remarkably quaint by today's standards
in both its look and execution, is a surprisingly accurate foreshadow
of the current Hollywood move toward the more graceful, balletic chaos
exhibited by movies like The Matrix and Crouching Tiger, Hidden Dragon.

Ultimately Big Trouble in Little China is a movie that survived thanks
to the home video market and for that we can only be grateful. While
its looks may have aged, its sense of humour and style is as fresh
today as the day it first rolled out in cinemas. In short, it's pure
escapist magic.