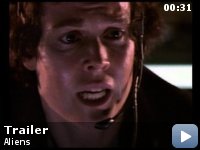 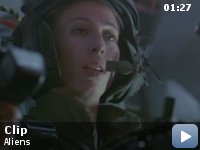 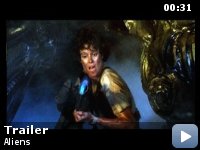 The planet from
Alien has been colonized, but contact is lost. This time, the rescue team has impressive firepower, but will it be enough?

Storyline
Fifty-odd years after Ellen Ripley survived her disastrous ordeal, her escape vessel is recovered after drifting across the galaxy as she slept in cryogenic stasis. Back on earth, nobody believed her story about the "Aliens" on the planet LV-426. After the "Company" orders the colony on LV-426 to investigate, however, all communication with the colony is lost. The Company enlists Ripley to aid a team of tough, rugged space marines on a rescue mission to the now partially terraformed planet to find out if there are aliens or survivors. As the mission unfolds, Ripley will be forced to come to grips with her worst nightmare, but even as she does, she finds that the worst is yet to come.

Taglines:
The bitch is back.

Continuity:
Near the end when Ripley is on the dropship, she is seen arming herself. We see her grab a flamethrower from the weapons rack. She then lays a pulse rifle on the deck. Next she pulls a pulse rifle from the rack, and lays down a flamethrower. (The 2010 Blu-ray is slightly re-edited to remove this error.)

Salvage team leader:
Bio-readouts are all in the green, looks like she's alive. Well, there goes our salvage, guys.

This ain't a film.

THE sci-fi movie. It's nearly perfect in every way: storyline, characters,
menacing threat, suspense, action, direction, music, emotion, etc… It's
always been a favorite of mine and still is. To me this is not just a film,
it is an experience. The adrenaline pumps like in no other film and rarely
have we had the chance to see a heroine as compelling as Sigourney Weaver.
She can kick anyone's ass and still keep a heart and soul. (Why she didn't
win the Oscar back in 1986 is beyond me.) When the action starts, you're in
for the ride of your life. Truly a milestone in movie making. Now if they
could only release it on DVD…