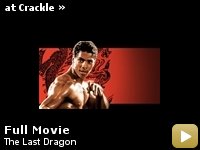 Storyline
A young man searches for the "master" to obtain the final level of martial arts mastery known as the glow. Along the way he must fight an evil martial arts expert and an rescue a beautiful singer from an obsessed music promoter.

Sho'nuff
/
The Shogun of Harlem

Taglines:
He's a martial arts master who refuses to fight. He's a Bruce Lee fan who's so sure he's Oriental that he eats popcorn with chopsticks. his friends think he's too serious. His family thinks he's crazy. His enemies think he's no challenges. But she knows he's THE LAST DRAGON.

In 1997, Busta Rhymes parodied the character Sho Nuff in his music video for "Dangerous". In the video, the music cuts off, and Busta proclaims, "Yo Leroy! Am I not the baddest . . ." and replicates the first on-screen speech of Sho Nuff in this movie.

Continuity:
The position of the blonde girl during Sho'nuff's entrance in the movie theater.

Angela:
Oh Eddie! You're all wet!

It is in Julius Carry's 'Sho Nuff' character that The Last Dragon finds
its
biggest laughs. Here is a towering, mean, cartoon character come to life.
Better yet is the fact that Carry, spouting lines that would make even the
most jaded comedy fan laugh, plays the material 100% straight, as do the
rest of the cast in their respective parts.

The Last Dragon is an action/kung fu/comedy film that knows it's a farce
but
at the same time has the characters play everything dead straight. This
works because we laugh at the outlandish plot and characters who, behind
the
fourth wall, would probably get along well with inmates at an insane
asylum.

Tiamak stars as Leroy "Bruce Leroy" Green, a quiet, timid martial artist
obsessed with Bruce Lee pictures and obtaining a special level called The
Glow, where his spirit takes over the mind's job, in turn creating an
awesome force to be reckoned with. But Leroy believes not in using his
martial arts for fighting, but for inner peace and strength. And then
there's Sho Nuff, the self-proclaimed Shogun of Harlem, who towers over
nearly everyone at about 6 feet 5 inches, has wild, afro-like hair, and
wears ungodly clothing one might find if MC Hammer invaded a sports
store.

Sho Nuff's favorite past times are wandering into packed movie theatres
and
challenging people to deadly duels because, well, he is just a weird guy,
who has an even weirder posse to back him up and to lick his boots at
every
other step.

Naturally, Sho Nuff has wanted to fight Leroy for some time, and there are
several moments in the film where he attempts to gain a rise out of the
young martial artist but with no luck. Throw into this mix a night club
VJ,
a crooked mafia-type with Cyndi Lauper's cousin for a girlfriend,
and you've got the makings of an `80s classic.

I love this movie. Tiamak is perfect in the lead as Leroy because he
always
looks as if he's about to break into a fit of child-like giggles. Vanity
is
Vanity. Blah. And Leroy's friend, Johnny Yu (Glen Eaton), nearly steals
the
movie as a martial arts student whose theory of fighting has to be heard
for
a laugh. But alas, it's Sho Nuff who steals the entire movie. When he's on
screen, you can't help but laugh, despite the character playing EVERYTHING
straight, and you gaze forth in wonderment – thinking to yourself that
maybe
beneath that hulking, cartoonish exterior, Carry was laughing inside but
never let it show on the outside. Good acting there.

It's silly, over-the-top, jam-packed with `80s nostalgia, and is, above
all,
very entertaining, with an exciting climax and a wonderful showdown
between
Sho Nuff and Leroy…

Do I recommend the movie? Sho Nuff!