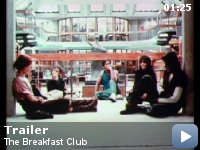 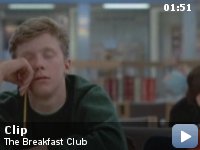 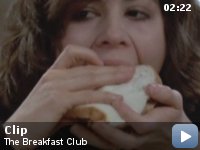 Five high school students, all different stereotypes, meet in detention, where they pour their hearts out to each other, and discover how they have a lot more in common than they thought.

Storyline
They were five students with nothing in common, faced with spending a Saturday detention together in their high school library. At 7 a.m., they had nothing to say, but by 4 p.m., they had bared their souls to each other and become good friends. To the outside world they were simply the Jock, the Brain, the Criminal, the Princess and the Kook, but to each other, they would always be the Breakfast Club.

Taglines:
They only met once, but it changed their lives forever.

Before Claire lights up a joint, Brian (Anthony Michael Hall) puts on a pair of sunglasses and speaks in a strange, very high voice. In a later John Hughes movie
Weird Science, Hall does this again for almost an entire scene.

Continuity:
During the scene where Principal Vernon is caught looking through confidential files by Carl the janitor, the position of Carl's arm as the two discuss the situation changes from on top of the cabinet to inside the drawer with each cut.

Andrew:
I said, leave her alone.

Bender:
You gonna make me?

Bender:
You and how many of your friends?

Andrew:
Just me. Just you and me. Two hits. Me hitting you. You hitting the floor. Anytime you're ready, pal.

We all remember being a teenager. A crazy, intense time when your high
were
higher and your lows were lower, and every experience was that much more
significant.

John Hughes movie brilliantly captures that environment, that era in our
lives, and all the social rifts that we all helped to create for
ourselves.
I have heard it said that "The Breakfast Club" is melodramatic, overacted,
and simplistic. If you subscribe to that flippant perspective you might
as
well join Vernon in his office because you are doing the same thing that
he
did. Seeing the movie as you want to see it, in the simplest terms and
the
most convenient definitions.

If you really want to understand this film, think back to your own high
school days. Think about your last year there. Dig out your old diary or
book of angstful poems and reaquaint yourself with who you were then, when
you felt things more deeply. "The Breakfast Club" does not exist not for
highschool kids, as some suggest. Why would they need it? They live
there.
It exists for all of us who have already been through there, who feel
that
they are above it now. It exists so that we can remember what it was like
and better understand ourselves, and the next generation. Because you
can't
dismiss something you understand.