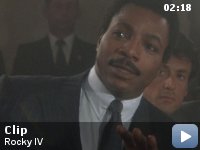 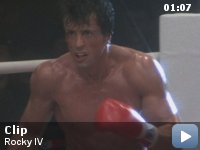 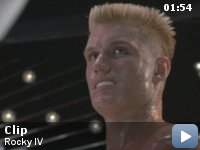 When Apollo Creed is killed in a match against a powerful Soviet boxer, Rocky decides to challenge him himself.

Storyline
Rocky Balboa, heavyweight champion of the world, is the trainer for Apollo Creed in an exhibition match against Ivan Drago, a "superman" boxer from the Soviet Union. When Apollo is killed in the ring by the brutal Drago, Balboa blames himself and promises to avenge his friend's death in the ring.

The Godfather of Soul

Taglines:
Get ready for the next world war.

In reality, Soviet Heavyweights were not allowed to box professional fighters during the Cold War.

Apollo:
We always have to be in the middle of the action 'cause we're the warriors. And without some challenge, without some damn war to fight then the warriors might as well be dead, Stallion. Now I'm asking you – as a friend – stand by my side this one last time.

In 1976, a phenom was born. By now we are all aware of the story of how
Stallone wrote the screenplay for Rocky in three days after watching a fight
between an extreme underdog and a highly favoured champ. Stallone was a
nobody back then yet he still stood his ground and didn't sell out to the
producers until they promised him the title role. The rest they say is
history. Well 9 years later, after three Rocky films, in my opinion comes
the best one. I realize that Rocky was all story and then a climatic boxing
match and that is what won the film the Oscar. And even though I can admit
that this film is not as concerned with character developement as it is with
training montages and bulging muscles, it is by far and away the most
entertaining film of the 5. And that is what I enjoy about the film. I
love that Rocky IV has some of the best training montages ever filmed. I
love that it has the heart of a lion when it shows Rocky scaling a mountain
that you know damn well he shouldn't be able to. And I absolutely love the
boxing match at the end of the film. This was completely choreographed by
Stallone and he and Dolph Lundgren boxed for real for about 75% of the
match. Stallone felt that it needed some authenticity so that was the way
to do it. And if you think Robert De Niro is an impressive method actor,
try this fact on for size. When filming the boxing match, some of the
scenes were so real that Stallone was rushed to hospital because his heart
was actually pushed up and his ribcage was slightly shattered. So when you
watch that match at the end, just know that what you are seeing is not
exactly choreography and trick camera work. They did the best job they
could to keep the look of the fight as real as possible. And I think this
is the best boxing match ever filmed, with all due respect to Raging Bull.

Stallone was in the shape of his life in this year as he filmed Rocky and
Rambo back to back and it shows. I have never seen a more sculpted man in
the movies than he was here. And I think that added to his superman
persona. If you notice in all the Rocky films, he grows a little each time.
And that also adds to the enjoyment of the film.

Rocky IV is different than Rocky, there is no doubt. And as much as I love
the first one, it doesn't come close to entertaining me as much as this one
does. Rocky IV starts fast and it ends hard and in between we are blessed
with a great soundtrack and a beautiful montage of all the Rocky films to
Robert Tepper's "There's No Easy Way Out" And it is here that even though
some will say that Stallone has substituted real human emotion with an MTV
ersatz video, I think it works well. There is nothing about this film that
I didn't enjoy and if you forget what the experience of watching this one is
like, I suggest that you rent it now and take a look at it. And try to
remember what it was like when you first saw this film back in the winter of
85. I remember I was in Kokomo Indiana visiting family for Christmas. My
mom and I walked into a packed theater and you want to talk about a place
erupting like a volcano, then this was the place. When Rocky finally hits
Drago to cut him over the eye and Duke yells " he's cut, he's cut! " the
crowd went into a frenzy. And you can look no further than that as to why
the Rocky films were so popular. It doesn't matter if you are Canadian,
American, Portuguese, Polish or Dutch or whatever, Rocky appeals to all of
us. Because all of us have been the underdog at some time in our lives and
we love to watch him and perhaps live vicariously through him. That is the
beauty of Rocky. If Rocky can do it then dammit so can I!

When the movie ended on that cold night back in 1985, and people were
filtering out to their cars for the drive home, I swear I could hear the
crowd chanting his name, as did the millions….. and millions of the Rock's
fans.