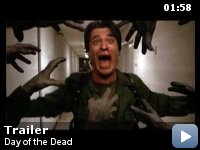 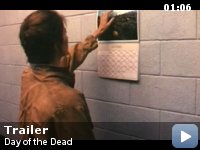 A small group of military officers and scientists dwell in an underground bunker as the world above is overrun by zombies.

Storyline
Zombies rule the USA, except for a small group of scientists and military personnel who reside in an underground bunker in Florida. The scientists are using the undead in gruesome experiments; much to the chagrin of the military. Finally the military finds that their men have been used in the scientists' experiments, and banish the scientists to the caves that house the Living Dead. Unfortunately, the zombies from above ground have made their way into the bunker….

Taglines:
Prepare yourself for the darkest day of horror the world has ever known!

Some of the headlines from the newspaper that says "The Dead Walk" appear to be: "Vice President Declares State of Emergency," "Whereabouts of President Unknown," "Food Supply Dwindles" and "Man Bites Man."

Revealing mistakes:
An obvious stunt-double for Anthony "Miguel" Dileo for the scene where he's thrown off of the platform by "Steele". (The stuntman appears to be Taso Stavrakis, who also plays the character of "Torrez" in the film.)

McDermott:
Nothing, nothing at all.

McDermott:
I've been sending up and down the coast from Sarasota to the Everglades and still getting back the same dead air. There's nothing! There's nobody or at least nobody with a radio.

Sarah:
All right then let's set down, we'll use the bullhorn.

McDermott:
Set down? Wait a minute, that's not in our contract!

Sarah:
It's the biggest city within 150 miles and we're going to give it every chance.

John:
I'll set us down. But I won't leave my seat and I'll keep the engine running. Now the first sign of trouble, I'm going up. If you ain't on board when that happens, you're likely to have a lousy afternoon.

A long-time sufferer of the "Alien 3 Syndrome"

"Day of the Dead" is a film that is an unfortunate sufferer of the "Alien
3
Syndrome". And, no, I don't classify those that are affected by the
syndrome
to be disappointing final entries in a trilogy. To suffer from "Alien 3
Syndrome", you must follow two exceptional films, and the entry that has
preceded you must be so exciting and action-packed that when you dare take
a
grimmer, more deliberately paced approach to your material, you will
become
universally reviled, with many people failing to notice that you have more
than your fair share of merits on your own. In fact, "Day of the Dead" has
a
LOT of merits – even more than the film that its syndrome is based on.
While
it doesn't quite approach the greatness of "Dawn of the Dead", it is still
an intelligent, first-rate horror effort and stands as one of the best
genre
films of the 80s.

In this final entry of George Romero's "Living Dead" trilogy, the walking
dead supposedly outnumber the humans by a ratio of 400,000 to 1. Twelve
people who have devoted themselves to studying and wiping out the zombies
hole up together in an underground missile silo, and for all we know,
these
could be the last twelve living humans on the face of the planet. Most of
these people don't capture our sympathy like the foursome who holed up in
the shopping mall in "Dawn". Half of them are gung-ho soldiers who seem to
take great pleasure in threatening the scientific team, and Romero spends
much of the first half focusing on the bickering and intense conflicts
between these people. In fact, for over an hour, the hordes of living dead
get very little screen time, as the story focuses on the tension between
the
characters, and the efforts of an off-the-wall scientist to train a
captured
zombie named Bub to act human. Compared to its predecessors, this long
section of the film may seem slow and talky, but it is always interesting
and, for the most part, effectively performed by its unknown cast.
Besides,
it all eventually leads up to a corker of finale when the zombies finally
invade the compound, and most of the humans become showcases for the
brilliance of Tom Savini, who outdoes even himself in the gore F/X
department.

While most of this material is very grim, "Day" ironically has the most
hopeful, upbeat conclusion in the trilogy – which, alas, is its only major
shortcoming. The quick transition to the final scene is so abrupt and
unexpected that the audience feels cheated, leaving the impression that
the
production ran out of money before the whole climax could be filmed.
Indeed,
Romero has often expressed his unhappiness about being underfunded for
this
project, which prevented him from creating a truly definitive final
chapter
for the trilogy. But while "Day of the Dead" may not quite be the ultimate
finish to one of the greatest trilogies of all time, it is still a very
satisfying conclusion (at least until Romero gets funding for his
long-rumoured "Twilight of the Dead"). It may not be popular among
everyone,
due to many unfair comparisons to its superior predecessors, but on its
own,
it is about as good as horror films get.