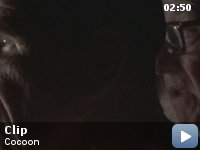 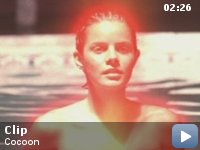 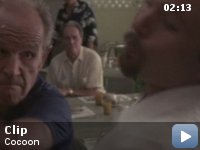 When a group of trespassing seniors swim in a pool containing alien cocoons, they find themselves energized with youthful vigour.

Storyline
A group of aliens return to earth to retrieve cocoons containing the people they'd left behind from an earlier trip. These cocoons had been resting at the bottom of the ocean. Once retrieved, they stored these recovered cocoons in the swimming pool of a house they'd rented in a small Florida town. Their mission is hampered by a number of elderly people from a nearby retirement community who had been secretly using the pool, and who discover unusual powers from within these cocoons.

Taglines:
Beyond the innocence of youth, and the wisdom of age, lies the wonder of… Cocoon

Hume Cronyn was a Golden Glove boxer and lost sight in one eye. In the scene where he hits the young orderly, without depth perception, he actually hit the young man and knocked him out.

Continuity:
Kitty massages Jack's right leg just after he bangs it. However, when they are talking the leg left is the injured one.

Joseph Finley:
Maybe they could give us permission to use the pool. We could pay them something.

Art Selwyn:
It wouldn't be fun if we had permission.


"Do not go gentle into that good night, Old age should burn and rave at
close of day; Rage, rage against the dying of the light." – Dylan
Thomas

The senior characters of this modern day fable took this poem to heart.

When we first meet the motley group, they are as many of us dread one
day becoming. Kept in a nursing home, days filled with vapid activities
like shuffleboard or mah-jongg, whiling away hours floating in a
deserted swimming pool, watching people your own age drop like flies.
When that changes through the magic of alien technology, they become,
if not the picture of reckless youth, at least a semblance of the
people they were once upon a time, proving the old cliché: you ARE only
as old as you feel. In that, it's a good lesson for people heading into
their golden years or even those of us just having midlife crises. We
can't help but grow old. But it's up to us whether we want to BE old or
merely mature.

For a science fiction movie, it would appear to have few special
effects. This is an illusion. There are quite a few effects shots,
although the variety of effects is rather limited. The glowing aliens
are quite good except for the all too familiar hand movements by
Caprice Rothe, who first did the job for "E.T." Still, by and large the
effects are impressive and convincing even when compared against the
latest films of the 21st century. Even more impressive was the
poolhouse, which was hastily constructed purely as a setpiece for the
movie. It looks absolutely real, as if it had sat there among the
Florida palms for decades.

Tahnee Welch, daughter of the seemingly ageless Raquel, was wholesomely
fetching here. Whether she was a limited actress or merely underplaying
the role is for others to decide. Ron Howard wisely kept Steve
Guttenberg's role limited, focusing mainly on the older characters. A
little Guttenberg goofiness goes a long way. Also present are the
standard Howard family repertory, with brother Clint as the nursing
home attendant and father Rance making a brief appearance as a
detective. Much as already been said about the excellent performances
of the older cast members. This was, after all, the role that finally
won an Oscar for Don Ameche. But they're slowly slipping away from us,
one by one. First Jack Gilford, then Ameche, then Jessica Tandy and
recently Gwen Verdon. At least we'll have this movie to remember them
by. Maybe they weren't at the peaks of their careers, but quite
possibly the roles they fit most comfortably.

Two attempts to cash in on this movie failed. Both 1987's "*batteries
Not Included," starring Tandy and Cronyn, and the 1988 sequel "Cocoon:
The Return" flopped. Neither had the genuine warmth of this original.
Ron Howard showed good judgement in turning down the chance to direct
the sequel.

As for the musical score, it's one of James Horner's better works,
mixing symphonic grandeur with childlike wonderment. Alas, he does fall
into old habits and reuse some bars and measures from his "Wolfen" and
"Star Trek II" scores.

It's a shame this movie never found the audience it deserved. I first
saw this in a shopping mall four-plex a couple of weeks after its
release. There couldn't have been more than 20 people in the entire
theater. The whole movie holds up remarkably well in the 16 years
since, except for the break dancing. My god, has it been 16 years
already? Where can I find some Antarean life force?