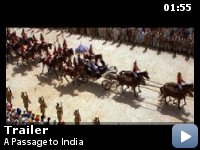 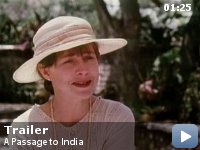 Cultural mistrust and false accusations doom a friendship in British colonial India between an Indian doctor, an Englishwoman engaged to marry a city magistrate, and an English educator.

Storyline
Tensions between Indians and the colonial British come to a boil when a white female tourist accuses a young Indian doctor of rape during a visit to some caverns. A study of colonial relations and the nature of memory. Based on E. M. Forster's novel.

Taglines:
David Lean, the Director of "Doctor Zhivago", "Lawrence of Arabia" and "The Bridge on the River Kwai", invites you on . . .[A Passage to India]

Audio/visual unsynchronized:
In a faraway shot at the "bridge" party at the club, an all-Indian band is playing, but the conductor's beat pattern is off- the song is in common time (4/4 time), but he is beating beat 3 when the band is playing beat 1.

Adela Quested:
I do so hate mysteries.

Richard Fielding:
We English do.

Mrs. Moore:
I rather like mysteries – but I rather dislike muddles.

Richard Fielding:
A mystery is only a high-sounding term for a muddle. Me and the Professor know that India is a muddle.

Professor Godbhole:
Agreed, I am sorry to say.

A dream. A nightmare. A new world. A battle with one's demons. A work of art!


Steven Spielberg claimed his greatest inspiration in becoming a
director was Sir David Lean. In motivating him in making a film, a Lean
epic would lift his spirits and inspire ideas. Evidence of his marks of
appreciations are in famous Indiana Jones shots, an eye for
breathtaking vistas – Empire Of The Sun being most evident (which was
originally a David Lean project). The legendary British director, who's
larger than life approach to film exhilarated audiences around the
globe with immortal classics as 'The Bridge On The River Kwai',
'Lawrence Of Arabia' and 'Doctor Zhivago', made an unexpected return in
1984, 22 years following the last epic with one of the most mythically
dream like productions ever to grace the silver screen. He took us on a
journey to picturesque India with his trademark scope in crisp
cinematography which filled our lungs with the most breathtaking
scenery. The new generation must rediscover the works of this great
human being who bestowed upon us some of the most memorable, fantastic,
larger than life epic experiences that have inspired countless
directors in their work. 'A Passage To India' is no exception. It is a
heart-wrenching, nightmarishly beautiful film, at the same time so
dream like, it transports you to another world that penetrates through
the spirit of self discovery.

Reminiscent of a famous Australian film "Picnic At Hanging Rock"
containing similar themes, a masterpiece directed by the poetic film
maker Peter Weir, this powerful entry is one of the most memorable
films of the 1980's.

The film follows the intersection of two unlikely people, English lady
Ms. Adela Quested (Judy Davis) and an Indian man Dr. Aziz (Victor
Banerjee) during India's British rule in the roaring twenties. It is
Adela's first time out of England as she is on her way to visit India
to meet her fiancé who's a judge in colonial British territory.
Accompanying her is her friend and future mother in law Mrs. Moore
(Peggy Ashcroft) who shares common interests with Adela in wanting to
see real India – in experiencing the countryside and meeting real
Indians. To their astonishment however, they soon realize that the
occupying English populace aren't as enthusiastic about the idea of
making close contact with these everyday Indians, believing India is
best experienced at a distance. But to Adela's hesitation to her
surroundings, she insists on organizing an expedition for sight-seeing.
Her new found friend and school teacher Richard Fielding (James Fox)
assembles a group of well-read, knowledgeable Indians to guide them
throughout the expedition, composing Professor Godbole (Alec Guiness)
and Dr. Aziz (who by chance acquainted himself with Mrs. Moore the
previous night). It isn't long before Adela and Aziz begin to explore
interests in one another, but in an untouched natural overwhelming
utopia that is India, what happens to Adela in a mystical cave far from
home ends as a controversy that threatens to tear Indian/British
relations into chaos.

The film explores the themes of repression, illusion, racism,
tolerance, forgiveness, self-discovery and justice all piled up into an
unforgettable symbolically and visually breathtaking masterpiece.

What we have here is one of the most emotionally engaging character
studies in film history. The film's setting is genius in portraying
self discovery in an unfamiliar place far from home. Like in 'Picnic At
Hanging Rock', there is strong emphasis on repression and loss of place
and time, creating a most delusional reality. Most importantly, it
points out the political oppression to perfection, clearly showing
English attitudes toward the very people they invaded. Human nature is
the film's primary focus. Adele Quested and Dr. Aziz both learn
important lessons the hard way, but never-the-less become stronger
human beings.

This almost mythical film absolutely drew me into this world David Lean
so brilliantly brought to the screen. One of the films greatest
highlights was the moving, magical, subtle and haunting score composed
by legendary Maurice Jarre. It influenced the film's atmosphere so
vividly, it fascinates every time I hear it. The cinematography came as
no surprise to me and this is David Lean at his indisputable best. I
was left grasping for air following the film's poignant conclusion. You
feel almost like you're there every time. He is the master at creating
an unforgettable atmosphere on an epic scale. This film was literally
like a Passage To India.

The cast was expertly selected. Judy Davis is perhaps one the greatest
actresses that ever walked into a film set. Her commanding physical
presence extracts such unforgettable performances, it leaves people in
awe of her talent. Her portrayal of Adela is extremely realistic and
you feel her emotions with such power. James Fox turns in a very
convincing performance as the man who stands for justice, for those who
can't gain it. Alec Guiness is arguably out of place as an Indian
scholar, but I believe he brought a nice touch to the film – he is one
of the greatest actors in the world. Besides, his role wasn't big
enough to criticize. Peggy Ashcroft gave in a marvelous performance of
a woman who sees the injustices only too well and can't stand the fact
that little is being done to compromise.

Everything about this film suggests it is the makings of a true artist.
And everything about this film suggests that David Lean was a
perfectionist who never lost his touch. It is easily one of the most
beautiful, haunting, mystical and awe inspiring films ever made. I
recommend it to anybody who loves film and better yet, to whoever
hasn't seen a David Lean film before. This is the perfect place to
start.