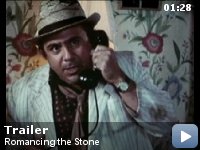 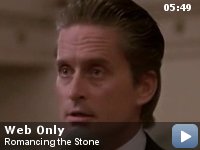 A romance writer sets off to Colombia to ransom her kidnapped sister, and soon finds herself in the middle of a dangerous adventure.

Storyline
Joan Wilder, a mousy romance novelist, receives a treasure map in the mail from her recently murdered brother-in-law. Meanwhile, her sister Elaine is kidnapped in Colombia and the two criminals responsible demand that she travel to Colombia to exchange the map for her sister. Joan does, and quickly becomes lost in the jungle after being waylayed by Zolo, a vicious and corrupt Colombian cop who will stop at nothing to obtain the map. There, she meets an irreverent soldier-of-fortune named Jack Colton who agrees to bring her back to civilization. Together, they embark upon an adventure that could be straight out of Joan's novels.

Taglines:
She's a girl from the big city. He's a reckless soldier of fortune. For a fabulous treasure, they share an adventure no one could imagine… or survive.

Manuel Ojeda was cast as Zolo based on a previous role in the film
Green Ice.

Continuity:
During the car chase, there are tire tracks in the grass from previous takes.

Grogan:
[a gunslinger breaks down the door of an old Western house and confronts the solitary young woman inside]
What's it gonna be, Angelina?

Joan Wilder:
[narrating]
It was Grogan, the filthiest, dirtiest, dumbest excuse for a man west of the Missouri River.

Grogan:
[cocks one barrel of his shotgun]
You can die two ways, angel: quick like the tongue of a snake, or slower than the molasses in January.
[cocks the second barrel]

Joan Wilder:
[narrating]
But it was October.

Grogan:
I'll kill ya, Goddammit, if it's the Fourth of July! Where is it?

I love this movie. I'm sure that it's in my top-ten somewhere, because ever
since I was a kid, I've never gotten sick of watching it. The premise is
one of those that's just so damn crazy it actually works. It starts with a
successful romance novelist, Joan Wilder, who has just finished her last
book, but lacks the sort of love-life that she writes about. When she
learns that her sister has been kidnapped and is being held hostage, she
takes off to South America to help her out. It seems that the kidnappers
want a treasure map that is in Joan's possession. Joan is very much a city
girl and doesn't fully realize the bind that she and her sis have gotten
themselves into. Once in South America, she takes the wrong bus, which
breaks down in the South American jungle. When she's held up by a corrupt
Police Chief, a very rugged, unshaven, shot-gun toting, Michael Douglas
(Jack Colton) shows up and kicks some ass. See, Jack is a bird-trapper who
wants nothing more than enough cash to buy himself a yacht. Realizing that
Joan is lost in the jungle and fully incapable of surviving on her own, Jack
agrees to take her to the nearest town for $300 in travellers' checks, so
off they go. By now, we've learned that besides the two goons who've
kidnapped Joan's sister (one of which is Danny DeVito in one of his funniest
roles EVER) the South American police are after the map as well. Everyone
wants what's at the end of the map. What follows for the next hour and a
half is one of the most exciting and funny action/adventure movies ever
filmed. Michael Douglas is absolutely perfect in the role of Jack Colton
and delivers some of the funniest one-liners I've ever heard. Kathleen
Turner is equally great as the naive romantic and, as always, she looks
great. A great script is brougth to life perfectly by Robert Zemeckis and
his direction is air-tight. Please go watch this movie, even if you've seen
it a hundred times already……"Oh YEAH!!!! Now that's a campfire!!!!