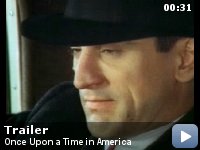 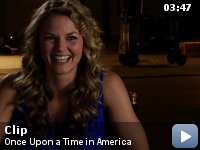 A former Prohibition-era Jewish gangster returns to Brooklyn over 30 years later, where he once again must confront the ghosts and regrets of his old life.

Storyline
Epic tale of a group of Jewish gangsters in New York, from childhood, through their glory years during prohibition, and their meeting again 35 years later.

Taglines:
As boys, they made a pact to share their fortunes, their loves, their lives. As men, they shared a dream to rise from poverty to power. Their story is now a "once upon a time" motion picture experience. [Australia Theatrical]

The scene where Noodles takes Deborah to dinner was filmed in Venice, while the fateful ride home was filmed an ocean away at the New Jersey Shore.

Continuity:
When Fat Moe gives Noodles the locker key, he opens the door of the clock. The key for winding up the clock is in place. After a quick cut to Noodles, the key is gone.

Beefy:
Where is he? Where's he hiding?

Eve:
I don't know… I've been looking for him since yesterday.
[second goon slaps her harshly; she falls onto the bed]

Beefy:
I'm gonna ask you for the last time: Where is he?

Eve:
I don't know… What are you gonna do to him?
[Two shots are heard]

Beefy:
[to his partner]
Stay here in case that rat shows up…

Make sure you get the director's cut!

Many people compare "Once Upon a Time in America" with "The Godfather".
In my opinion these two movies can't be compared. Both are masterpieces
in their own way, but each of them has a different style. You don't
compare a Picasso to Michelangelo's Sixteen Chapel either, do you?

What is it that makes this movie a masterpiece? Well, first of all
there is the director. Sergio Leone is a real master when it comes to
creating a special atmosphere, full of mystery, surprises and drama…
He's one of the few directors who understands the art of cutting a
movie in such a way that you stay focused until the end.

The way the movie was cut is also the reason why a lot of Americans
don't think this movie is very special. There are three versions, but
only the European version is how the director imagined it to be. He
didn't want his movie to be shown in chronological order (1910's –
1930's – 1960's), but wanted to mix these three periods of time. The
studio cut the movie in chronological order, loosing a lot of its
originality and therefor getting a lot of bad critics. If you want to
see this film the way Sergio Leone saw it, you have to make sure you
get the director's cut.

The second reason why this movie is so great is the music. Ennio
Morricone, who is seen as the greatest writer of film music ever, did
an excellent job. Together with the images, the music speaks for itself
in this movie. From time to time there isn't said a word, but the music
and the images on their own tell the story. He understood perfectly
what Sergio Leone wanted and composed most of the music even before the
movie was shot.

Last but not least there is also the acting and the script. The actors
all did an excellent job. But what else can you expect from actors like
Robert De Niro, Joe Pesci… They helped making this movie as great as
it is by putting there best effort in it. The script helped them with
it. It took twelve years to complete, but it hasn't left any detail
untouched. The writers really thought of everything when creating it.

I can really recommend this movie to everyone, but especially to people
who like the gangster genre. When you want to see the movie, you better
be sure that you will have the time for it. This isn't a movie that is
finished after 90 minutes. You'll have to be able to stay focused
during 3 hours and 47 minutes, which will certainly not be easy during
the first 20 to 30 minutes. Some scenes at the beginning only make
sense when you have seen the end of the movie. But when you are able to
stay focused, you'll find this one of the best movies you've ever seen.
I certainly did and I rewarded it with a well deserved 10/10.