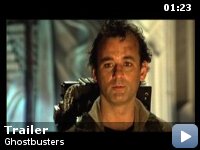 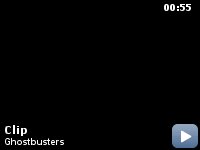 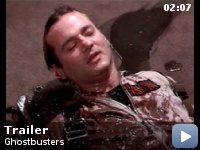 Storyline
Three odd-ball scientists get kicked out of their cushy positions at a university in New York City where they studied the occult. They decide to set up shop in an old firehouse and become Ghostbusters, trapping pesky ghosts, spirits, haunts, and poltergeists for money. They wise-crack their way through the city, and stumble upon a gateway to another dimension, one which will release untold evil upon the city. The Ghostbusters are called on to save the Big Apple.

Taglines:
Here To Save The World Again [re-release]

The floating Sigourney Weaver special effect is an actual physical effect, not an optical effect. The actress was put in a full body cast and attached to a post that was hidden in the curtains. According to the commentary, this effect came from director Ivan Reitman's Broadway experience.

Plot holes:
When Peter Venkman goes to Dana's for their date and finds her possessed by Zuul, he talks to Egon over the phone and tell him he shot her up with Thorzine. Why would he bring Thorzine for a date with Dana?

Dr. Peter Venkman:
All right, I'm gonna turn over the next card. Concentrate… I want you to tell me what you think it is.


What's that you say? Ghostbusters, one of the most financially
successful and over-hyped comedies of the eighties, underrated? Yes.
Precicely because it was so over-hyped and made so much money, there
has been a stigma attached to this film identifying it as a childish FX
piece, when it is nothing of the sort. Most of the lines people
remember("He slimed me," "OK. So? She's a dog," "When someone asks you
if you're a god, you say YES!") are not its funniest or wittiest lines,
which often are missed on first or even second viewing. I laugh every
time I observe a gag or a quip that I somehow missed the other 20 times
I viewed a scene; "Egon, this reminds me of the time you tried to drill
a hole through your head, remember that?" "That would have worked if
you hadn't stopped me", or, to the driver of a van from a loony bin,
"Dropping off or picking up?" Brilliant.

Not only is Ghostbusters funny, it manages to include some truly scary
scenes. And not just lose-your-popcorn moments like the fridge from
Hell, but also scenes of quiet, thoughtful chill, like Egon's retelling
of how the possessed apartment building came into being, or Winston
recalling the Book of Revelation. Which other film has managed to
combine the Marx Brothers with HP Lovecraft?

The special effects hold up well, besides some obvious studio sets and
models, but what really creates this film's world is the stunning
cinematography. Manhattan, perhaps the pinnacle of Gothic architectural
evolution, is brilliantly utilised here to create a sense of menacing
grandeur. After watching "Ghostbusters" I couldn't imagine the realm of
the Old Gods opening into our world from anywhere else. The soundtrack
is great, not the overrated theme (Which was in fact lifted from Huey
Lewis' "I Need a New Drug"), but the wonderfully blusey "Cleaning Up
the Town," the creepy proto-techno chiller "Magic" and also the
wonderful score by the late and much lamented Elmer Bernstein.