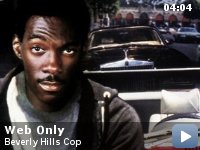 A freewheeling Detroit cop pursuing a murder investigation finds himself dealing with the very different culture of Beverly Hills.

Storyline
Detroit cop Axel Foley is delighted when he receives a surprise visit from his best friend Mikey Tandino, who lives in California. Not long after Mikey arrives in Detroit, Mikey is killed, right in front of Axel, by a man named Zack. Axel follows Zack to Beverly Hills, California, where Beverly Hills police department Lieutenant Andrew Bogomil assigns Detective Billy Rosewood and Rosewood's partner, Sergeant John Taggart, to keep an eye on Axel. Axel visits his friend Jenny Summers, who works in an art gallery. With Jenny's help, Axel discovers that Zack works for Jenny's boss, Victor Maitland, the man who owns the art gallery. Maitland is a drug kingpin who is using the gallery as a front, and Maitland had Zack kill Mikey after Maitland accused Mikey of stealing some of Maitland's bonds. With the help of Jenny, Billy, and Taggart, Axel does what he can to make sure Maitland and Zack won't kill any more people.

Taglines:
In Detroit a cop learns to take the heat. In L.A. he learns to keep his cool. [Theatrical Australia]

The highest-grossing movie of 1984.

Continuity:
When the goon gets thrown over the buffet table at the Harrow club, his face lands in some sliced oranges. In the next shot we see cream/strawberries etc on his face.

Detective Rosewood:
Wow. You know, it says here that by the time the average American is fifty, he's got five pounds of undigested red meat in his bowels.

Sergeant Taggart:
Why are you telling me this? What makes you think I have any interest in that at all?

Detective Rosewood:
Well, you eat a lot of red meat.


Beverly Hills Cop was a big hit in the 1980's. The film was loved by
many action fans, as well as comedy fans and movie buffs at the time.
It is still being admired by many people as one of the funniest cop
movies ever made.


The thing I love about this movie is that Eddie Murphy was perfectly
cast as the Axel Foley character. Originally, Sylvester Stallone was
considered for the role. Thank God he wasn't! Eddie Murphy was perfect
for the role, because he can be a clever cop, and can at the same time
be very funny! Another great thing about Beverly Hills Cop is its
smashing soundtrack. There are some great hit songs from the 1980's
featured in the soundtrack, as well as an excellent musical score which
can be heard throughout the movie (to me, the musical score is the
Beverly Hills Cop "theme song").

Perhaps the only downside of Beverly Hills Cop is that it can be pretty
slow in certain scenes. Hardcore action fans would probably be
disappointed by this. But let's face it: Beverly Hills Cop is not an
all-out mindless action movie. It is actually a clever comedy with
elements of action present within.

To conclude, Beverly Hills Cop is arguably Eddie Murphy's best film
since he fits the Axel Foley character perfectly. There are many funny
scenes featuring Eddie Murphy that will have people laughing (even the
action scenes can be cleverly funny)!

P.S: Look out for cameos by Paul Reiser, Bronson Pinchot, and Damon
Wayans!