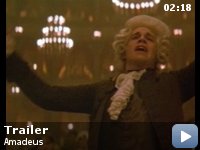 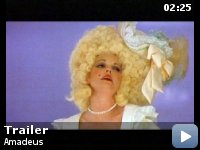 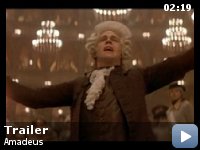 The incredible story of Wolfgang Amadeus Mozart, told in flashback mode by Antonio Salieri – now confined to an insane asylum.

Storyline
Antonio Salieri believes that Mozart's music is divine. He wishes he was himself as good a musician as Mozart so that he can praise the Lord through composing. But he can't understand why God favored Mozart, such a vulgar creature, to be his instrument. Salieri's envy has made him an enemy of God whose greatness was evident in Mozart. He is set to take revenge.

Katerina Cavalieri
/
Constanza in 'Abduction from the Seraglio'

Papagena in 'The Magic Flute'

Taglines:
Amadeus. The man. The music. The magic. The madness. The murder. The mystery. The motion picture.

Elizabeth McGovern, who had earned an Oscar nomination for her performance in Milos Forman's previous film
Ragtime, screen tested for a role in this film.

Continuity:
In the scene near the end when the bed-ridden Wolfgang Amadeus Mozart is dictating a movement of his Requiem to Antonio Salieri, he tells him to write the bass instruments' notes as the "tonic and dominant" pitches in the key of A minor. But the notes that play, and the notes that actually appear in the score, are the tonic and subdominant.

Salieri:
Mozart! Mozart, forgive your assassin! I confess, I killed you…

OH! This movie is WONDERFUL, this movie is BEAUTIFUL! I just love it,
and not because of my fixation on Mozart, but because it is a beautifully
made, completely moving work of art.

What many people do not seem to understand is that the film is
entirely
Salieri's–it is NOT in any way about Mozart himself, nor is it a
biography
about the composer. It is about Salieri's madness and obsession WITH
Mozart,
and yet because the character of Mozart is played so unforgettably by Tom
Hulce in such an unconventional performance, the viewer takes most notice
of
him and will think him the central figure. The film chooses to highlight
the
comparison of mediocrity versus genius; Mozart is obviously the better
of the two composers, and Salieri can see his own mediocrity and recognize
his inferiority to Mozart so well that he is driven insane. Watch the film
again; while it is true much biographical information about Mozart's life
is
given while telling us relatively little on Salieri's, you will see that
the
purpose of this is only to highlight Mozart's genius, his natural and
uncanny abilities that come so easily to him. We see how his life affects
Salieri's directly and we see Salieri old in his wheelchair, long after
Mozart has died, still being affected by it.

One might say "Then WHY is it called 'Amadeus?'" as that is Mozart's
middle name, and naming the film after him would certainly cause one to
believe that the central figure would have the title (was not "Forrest
Gump"
about Forrest Gump?) But why, then, "Amadeus?" Why not "Mozart" or
"Wolfgang," the only names he is referred to as in the movie? Look at the
connotative meaning of the name "Amadeus:" In Latin it means "Loved by
God."
It's so perfect, so fitting that this should be the title; Peter Schaffer
could not have asked for better! Not only does Salieri throughout the
entirety of the movie express his disdain for Mozart, but he keeps coming
back to God: "Why does God not give me talent? Why Mozart? Why does God
love
him, but not me?" Indeed, Mozart IS loved by God, if God's love is shown
through gifts and abilities. "Amadeus" does not stand for Mozart himself,
but for a major theme expressed throughout the film.

Oh, the themes, motifs, symbolism and hidden meanings! But what of
the
movie itself? The brilliant acting, the beautiful dresses and jackets, the
unforgettable scenes? F. Murray Abraham is perfectly cast in this
perfectly
acted role; he grimaces and holds back hatred so perfectly, and nothing
about his performance makes you think he is acting. Tom Hulce as Mozart is
wonderful-most will remember his annoying laugh that bursts forth at the
most inappropriate of times. The most memorable scene occurs at the end,
when Mozart is on his deathbed, dictating his requiem to Salieri as
Salieri
struggles still to understand the brilliant notes flowing through Mozart's
mind. The importance lies not in the fact that Mozart is dying (though his
departure from the movie, for me, was quite traumatic) but in seeing how
Salieri must have more of Mozart's work; he hates this man and yet he
recognizes the brilliance of his music, a brilliance he will never posses.
Some of the most enjoyable scenes depict productions of Mozart's operas;
"The Abduction from the Seraglio" finale in the beginning is bright and
joyous; "The Magic Flute" Queen of the Night aria scene is shown and
contains of the most beautiful arias I have ever heard. Even if you don't
like opera, you will be amazed at how high the soprano must sing.

This is just my absolute favorite movie, and I certainly did not
analyze it like this the first time I saw it. I did not see everything
either, the important themes and such, but every time I watched it I got
more out of it. And it really is just so enjoyable, so funny, so perfect.
The music, the actors-there is just something about them. Perhaps because
none went on to be stars, and all you see is the movie, not the actors. I
am
basing everything on the original cut, not the new director's version,
which
I have seen, but I have entirely different things to say about it. The
original is perfect as is. Watch it, you will see what I mean. You'll love
it. I know I do!