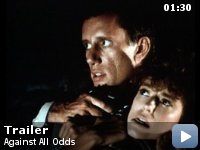 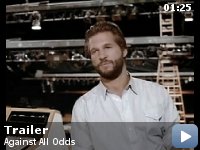 A gangster hires an ex-football player to find his girlfriend. When he finds her, they fall in love, and the twists start to appear.

Storyline
Terry Brogan, an aging football player in L.A., is cut early in the season; he needs money, so he takes a job from a shady friend of his, Jake Wise, to track down Wise's girlfriend, Jessie, who's somewhere in Mexico. She's also the daughter of a very wealthy land developer, who owns Terry's team. He heads for Cozumel, finds Jessie, and promptly falls in love with her. He thinks it's mutual, then without warning, she heads back to L.A. and Jake. What's going on with her, and what's the connection between Jake's hold on Jessie and the various politicians, lawyers, and environmentalists who seem to be converging on some sort of land deal? Terry keeps looking for answers.

Taglines:
Sometimes love is the most dangerous game of all.

Continuity:
In "The Palace" scene where "Kid Creole & the Coconuts" are performing, Terry leaves the main floor and goes into Jake's office. The song playing in the background "Curiosity" skips a beat when heard muffled in Jake's office.

Terry Brogan:
Señor! Have you, uh, seen this woman?

VERY loose remake of "Out of the Past"


Ex football player Terry Brogran (Jeff Bridges) takes a job from sleazy
friend Jake Wise (James Woods)–find his ex girlfriend Jessie Wyler
(Rachel Ward) who shot him and ran away with a large amount of his
cash. Terry tracks Jessie to Mexico…and immediately they fall in
love. That's the first hour–the second hour becomes very convoluted
with murders and double crosses all over the place.

Interesting movie which is a semi-remake of "Out of the Past". In fact
Jane Greer from the original plays the mother of her character here!
The original was a strong, well-written film noir. This is not film
noir–it's a combination romance/mystery/melodrama. Also Greer played a
totally amoral woman in the original–here Ward isn't amoral, just
misunderstood. Also Bridges is all pumped up and him and Ward work
wonderfully together. Their frequent very R rated sex scenes really
work. And it looks great–a portion of the film takes place in Mexico.
Still there are definite problems here.

One character, Edie (Swoosie Kurtz) is introduced to provide some REAL
clumsy exposition…and doesn't pop up again until a HOUR later. I had
forgotten who she was! Alex Karras is incredibly bad in his role. The
plot gets way too confused. And the movie isn't sure what it wants to
be. It switches gears so much I thought I was gonna get whiplash! The
best part of the movie–an incredible car race down Sunset Blvd. has
NOTHING to do with anything in the movie! The acting is pretty good.
Bridges (in one of his few commercial films) and Ward LOOK fantastic,
have great bodies and are both good in their roles. Woods is,
surprisingly, pretty wooden. Greer isn't in much but she IS very good.
And Richard Widmark hams it up in his small role.

Also the film has a surprisingly somewhat downbeat ending. And there's
a wonderful title song by Phil Collins (nominated for an Academy
Award).

A very interesting movie. I give it a 6. A sizable hit in its day–but
that's because of the steamy sex scenes between Ward and Bridges.