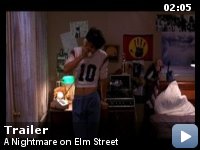 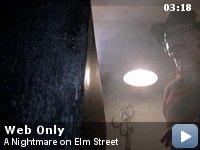 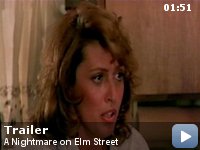 In the dreams of his victims, a spectral child murderer stalks the children of the members of the lynch mob that killed him.

Storyline
On Elm Street, Nancy Thompson and a group of her friends including Tina Gray, Rod Lane and Glen Lantz are being tormented by a clawed killer in their dreams named Freddy Krueger. Nancy must think quickly, as Freddy tries to pick off his victims one by one. When he has you in your sleep, who is there to save you?

Taglines:
She is the only one who can stop it… if she fails, no one survives.

The very first time we see Freddy in the movie, he isn't being played by Robert Englund, but by special-effects man Charles Belardinelli, as Belardinelli was the only one who knew exactly how to cut the glove and insert the blades.

Revealing mistakes:
Freddy intimidates Tina by slitting off his own pinkie and ring fingers, but blood only spurts from the pinkie.

Hallguard:
No running in the hallway.

A movie that rejuvenated the slasher genre


By 1984, the slasher genre was wearing thin. Halloween bombed out with
number 3, and Friday the 13th was falling into the dreadful mix of
completely cliché horror. Without A Nightmare on Elm Street, that could
have been it for the slasher film. With it, however, the genre was
brought off the respirator for another 10 years when Craven did it
again with Scream, but I digress. Wes Craven delivers a very original,
creative, and well played out horror film that has the perfect level of
plot, fright, gore, and imagination. The balance of these elements is
key, as it gives you the best of all of them, without becoming too
cliché, too bloody, or too silly. The movie keeps you with the
characters throughout, who, unlike in the Friday the 13th series,
aren't there only to be lined up for slaughter. To top all that off,
there's the smart, fear-inspiring bogeyman Freddy Krueger, who is one
of the greatest villains in cinema history. The combination of all
these factors makes A Nightmare on Elm Street easily recognizable as a
landmark in classic horror.

Nancy and Tina are a little upset. They both are having terrifying
nightmares of someone they can only describe as a man in a dirty
sweater with knives for fingers, and Tina is having some guy issues. In
fact, this nightmare shook Tina up so much that she has her friends
over to keep her company, and has some great makeup sex with her man,
Rod. Well, the man with the dirty sweater visits her subconscious once
again, and she is inexplicably dragged to the ceiling and butchered, in
an incredibly brutal, horrifying scene. Rod is arrested for the crime,
and one by one, this mysterious specter assimilates Nancy and her
friend's dreams. She keeps being stalked by this bogeyman, and after
several episodes (that nearly puts her in the nuthouse), Nancy learns
of a certain child murderer, Fred Krueger, who happened to use a glove
with knives to kill the kids, and was also burned to death by the
parents of the neighborhood. Now knowing what she's up against, Nancy
prepares for battle, but how do you fight your dreams? An interesting
approach is taken by Craven to solve that problem, leading to the final
show down between the lion and the lamb. The whole ordeal ends with a
twist so bizarre that you can't help but love it.

When this movie was made, Halloween had set the stage, and Friday the
13th turned into what is now known as a cliché slasher. Wes Craven
picked up on the psychological terror of Halloween, and the gore in
Friday the 13th, and made it a psychologically chilling gory movie,
while not turning to exploitation just to keep your interest. It stays
terrifying by unbelievably violent and scary scenes while not going
over-the-top. What makes these scenes effective is not only Craven's
imagination, but the movie has a good, fear-inspiring villain. Freddy
Krueger is the perfect horror villain because he's so brutal that it's
terrifying. He hits home with everyone's idea of the bogeyman, but
instead of hiding in your closet (where you can be safe from), he gets
you in your dreams. There's virtually no way to stop him. How do you
resist sleep? How do you resist dreaming? Of course, the idea is so
outrageous that no one believes Nancy, which leaves the audience and
the characters frustrated. The problem is, the person with the power is
the person whose in control, and that's him. That's what allows Craven
to build the tension in the movie. Again, like Carpenter's Halloween,
Craven gets you attached to Nancy and her friends, instead of
presenting characters in hopes of you being scared when they die, or
just to pad the body count (and he still makes it gory without that
factor). They're ordinary teenagers that a young audience can relate
to, which is the target audience for this film.

If you think about it, the movie is kind of goofy. A clown-like
bogeyman who haunts your dreams with various wisecracks. I guess we
needed something less cliché. This is one of the most original horror
movies I've ever seen, and is one of my favorites. Craven brings the
evil, scar faced bogeyman that was considered a flop by Hollywood into
one of the scariest, most memorable movie villains of all-time. The
acting by relatively new actors is pretty good (holy crap, Johnny
Depp's first!), especially for Heather Langenkamp as Nancy and Robert
Englund as Freddy. The screenplay is very well written, as the dialog
isn't cheesy and it goes with the time period. No event is put in only
for exploitation (like random strip poker in Friday the 13th), so the
atmosphere stays chilling and doesn't turn stale. Not just a great
horror movie, but a great scary movie. A real gem from Wes Craven (who
gets to be called the master of horror for this epic) that arguably
saved the slasher genre from itself.