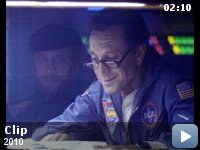 A joint American-Soviet space expedition is sent to Jupiter to learn what happened to the Discovery.

Storyline
In this sequel to 2001: A Space Odyssey, a joint American- Soviet expedition is sent to Jupiter to discover what went wrong with the U.S.S. Discovery against a backdrop of growing global tensions. Among the mysteries the expedition must explain are the appearance of a huge black monolith in Jupiter's orbit and the fate of H.A.L., the Discovery's sentient computer. Based on a novel written by Arthur C. Clarke.

Taglines:
We are not alone.

Cameo:
[Arthur C. Clarke]
sitting on a park bench in front of the White House, feeding the pigeons.

Revealing mistakes:
As the Leonov brakes around the dark side of Jupiter, the cable run used to pull the fireball past the camera is visible. Also, bits of flame can be seen to drop off the fireball as though pulled straight down to the bottom of the frame, when no such thing would happen.

Dave Bowman:
My God! It's full of stars!

In the future, there are no lightbulbs

I wondered that when the interior of the Leonov (CCCP ship) was so
freegin'
dim. Or maybe the Ruskies were trying to save power by keeping all of the
lights off! That really piqued my curiosity…
On the whole, 2010 is an above average, yet not superior movie. If any
fans
of AC Clarke's series have read the book "The Odyssey File", which
chronicles the making of 2010 (the book is composed of e-mail
correspondence
between Clarke and director Peter Hyams. They were among the first users
of
e-mail technology – in 1984!) reveals the director's paranoia and even
humility as he hopes his film will even come close as a worthy successor
to
the peerless original. That peerless original, of course, is
2001.

2010 is dated, somewhat forgotten, and does fall short of the power of
Kubrick's vision (how many times have you heard THAT before?). But Stan
the
Man is a hard act to follow. While 2001 is timeless, 2010 reveals its
easily
dated personality on a couple of occasions. The Cold War theme is the most
obvious. The computers, monitors, and graphics used throughout are
instantly
identifiable, dressed-up Commodore 64-era tech hardware. Roy Scheider's
character, Dr. Floyd, instructs his crew to "listen to your cassettes" to
receive updates on their mission. Okay, so that line of dialogue wouldn't
fly past 1992, when CDs were on the verge of killing the audio cassette
star
(*). But 2010 is not without merit. It follows its predecessor's footsteps
to a faithful degree, filling in the aftermath of the Bowman-HAL fiasco,
and
the slew of interesting and dangerous ramifications it
created.

Peter Hyams obviously set out to create a cerebral, based-in-reality
production, unlike the other sci-fi movies of his day, which gave 2010 a
distinct image. Return of the Jedi came out the year before, 1983, and the
moviegoing public was probably still hot on heels of the Star Wars
depiction
of space movies, which I assume hurt the box-office chances of
2010.

It is a dated, yet hidden gem, crafted together with solid intentions and
performances. The supporting cast of Helen Mirren, John Lithgow, and Bob
Balaban play off each other very well and supply some thought-provoking
and
entertaining moments. The scenes with Bowman and Floyd are gripping, as is
the later dialogue between Bowman and HAL. There are no explosions or
corny
"director tools" used, and the special effects (well, excluding the
interior
computer sets of the Leonov) were not revolutionary but get the job
done.