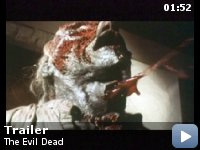 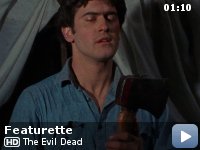 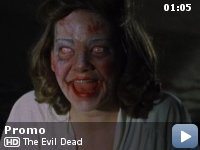 Five friends travel to a cabin in the woods, where they unknowingly release flesh-possessing demons.

Storyline
Five friends go up to a cabin in the woods, where they find unspeakable evil lurking in the forest. They find a tome called the Necronomicon and the taped translation of the text. Once the tape is played, the evil is released. One by one, the teens are possessed. With only one remaining, it is up to him to survive the night and battle the evil dead.

Taglines:
Can They Be Stopped?

During the scene when Linda was possessed, the make-up artist actually first wanted to make her look like a snake-like creature, as can be seen when Ash is dragging her outside (filmed before the scene indoors with her singing the creepy song). Her make-up was dark and a little more greenish, but eventually they changed the make-up to an evil doll-face look.

Continuity:
When Ash hits Cheryl's hand with the end of his shotgun and closes the door, in the next shot you can see that the blood that spilled on the edge of the door disappears.

Scotty:
Hey, Ash, where are we?

The ultimate in terror

It's the early 80's, what do you expect? This is a scary scary film. And
I
think I know why films now a days can't hold a candle to films like
Halloween and Evil Dead. And that is because a photo copy is never as
good
as the original. That is the bottom line. Directors don't care about a
lot
of the material that they are filming today, especially when it comes to
horror films and that is because they don't write their own stories. They
do someone elses work. But not Evil Dead. This was Raimi's baby from the
outset. When films like the two mentioned were filmed they were filmed by
two directors that were complete unknowns. They had no pressure to make a
great film and they did it on an incredibly low budget. Halloween was
made
for $150,000 and Evil Dead for $50 000. So what that meant is that the
directors could stick to their visions but they had to find innovative
ways
to do so. Their budgets didn't allow a heap of special effects so they
had
to rely on what they knew. And that was, how to create atmosphere using
the
camera. And Evil Dead is one of the best at doing that. There is one
scene
in this film that I will never forget and that is one of the early scenes
where the cast arrives at the cabin. Here we see a long shot of the cabin
and it has very eerie music playing. This shows the cabin as being
menacing. It lets you know that there is evil in that cabin. And that we
are in for a hell of a ride.

Sam Raimi made a masterpiece here that I believe stands the test of time.
You can put this film up against any of today's so called horror films and
I
guarantee you this scares you more. Raimi cares about his movie and he
does
everything to make you feel the terror that the cabin people feel. We are
scared and disgusted at what happens when one of the women goes outside
alone at night and meets a tree that does unspeakable things. And when
the
book is first introduced…. that is horror movie history there. What a
brilliant concept. A book that is evil. I have often wondered about such
books. We hear about them all the time in movies about ancient Egypt and
ancient times. But here we have a book that has weird incantations from
another world and another language, and you just know that as soon as some
idiot utters the words that they are not supposed to say, well they won't
be
around much longer.

The Evil Dead is a miracle. It was made on a rock bottom budget yet it is
scarier than any Hollywood movie that is made for 20 million could ever
hope
to be. If you want to truly experience a frightening experience, rent
this
film, it knows what it wants to say. And it knows how to make you afraid.
So be afraid. Be very afraid. You may never look at the forest the same
again.