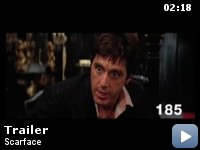 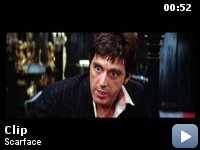 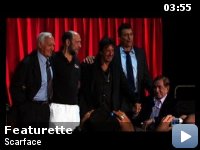 In 1980 Miami, a determined Cuban immigrant takes over a drug cartel while succumbing to greed.

Storyline
When Fidel Castro opens the harbor at Mariel, Cuba, he sends 125,000 Cuban refugees to reunite with their relatives in the United States. Among all the refugees, there is one who wants it all, his name is Tony Montana. Tony and his friend Manny arrive in the United States and start in small time jobs. Soon, they are hired by Omar Suarez to pay money to a group of Colombians. When the deal goes wrong, Tony and Manny leave with the money and succeed in their job. Soon Tony meets with drug kingpin Frank Lopez and falls for his boss's girl, Elvira. Pretty soon Tony will know that those who want it all, do not last forever; that is the price of power. The world will know Montana by one name….SCARFACE.

Taglines:
He was Tony Montana. The world will remember him by another name…SCARFACE.

Errors made by characters (possibly deliberate errors by the filmmakers):
When in the bathtub, the flying "pelican" that Tony tells Manny to watch on TV is actually a flamingo.

Fidel Castro:
…al esfuerzo y al heroísmo de una revolución… ¡No los queremos! ¡No los necesitamos!
[translated… to the effort and heroism of a revolution… We don't want them! We don't need them!]

Every great gangster movie has under-currents of human drama. Don't
expect an emotional story of guilt, retribution and despair from
"Scarface". This is a tale of ferocious greed, corruption, and power.
The darker side of the fabled "American Dream".

Anybody complaining about the "cheesiness" of this film is missing the
point. The superficial characters, cheesy music, and dated fashions
further fuel the criticism of this life of diabolical excess. Nothing
in the lives of these characters really matter, not on any human level
at least. In fact the film practically borderlines satire, ironic
considering all the gangsta rappers that were positively inspired by
the lifestyle of Tony Montana.

This isn't Brian DePalma's strongest directorial effort, it is
occasionally excellent and well-handled (particularly the memorable
finale), but frequently sinks to sloppy and misled. Thankfully, it is
supported by a very strong script by Oliver Stone (probably good
therapy for him, considering the coke habit he was tackling at the
time). The themes are consistent, with the focus primarily on the life
of Tony Montana, and the evolution of his character as he is consumed
by greed and power. The dialogue is also excellent, see-sawing
comfortably between humour and drama. There are many stand-out lines,
which have since wormed their way into popular culture in one form or
another.

The cast help make it what it is as well, but this is really Pacino's
film. One of his earlier less subtle performances (something much more
common from him nowadays), this is a world entirely separate from
Michael Corleone and Frank Serpico. Yet he is as watchable here as
ever, in very entertaining (and intentionally over-the-top) form. It is
hard to imagine another Tony Montana after seeing this film, in
possibly one of the most mimicked performances ever. Pfeiffer stood out
as dull and uncomfortable on first viewing, but I've come to realize
how she plays out the part of the bored little wife. Not an exceptional
effort, but unfairly misjudged. The supporting players are very good
too, particularly Paul Shenar as the suave Alejandro Sosa.

Powerful, occasionally humorous, sometimes shocking, and continually
controversial. "Scarface" is one of the films of the eighties (whatever
that might mean to you). An essential and accessible gangster flick,
and a pop-culture landmark. 9/10