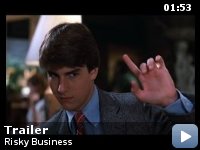 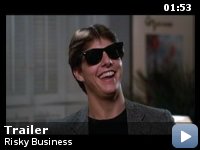 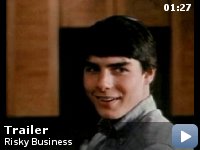 A Chicago teenager is looking for fun at home while his parents are away, but the situation quickly gets out of hand.

Storyline
A suburban Chicago teenager's parents leave on vacation, and he cuts loose. An unauthorised trip in his father's Porsche means a sudden need for lots of money, which he raises in a creative way.

Taglines:
There's a time for playing it safe and a time for Risky Business.

The dance scene where Joel dances to "Old Time Rock N' Roll" was completely improvised. In the script Tom Cruise was simply instructed to "dance to rock music".

Factual errors:
In the scene in Joel's home when he has the Princeton interview, he states that he wishes to major in business. Princeton has never offered a business major.

Joel Goodson:
[voiceover]
The dream is always the same. Instead of going home, I go to the neighbors'. I ring, but nobody answers. The door is open, so I go inside. I'm looking around for the people, but nobody seems to be there. And then I hear the shower running, so I go upstairs to see what's what. Then I see her; this…

"Money may not buy happiness, but it will buy the things that will Make you happy"


There are too many reviews of Risky Business for mine to have any
relevance as a movie review. However, this movie is for me a time
capsule of the era I saw it in, and a photograph of the future to come
in American culture.


I saw this movie when I was 22 in a tiny college theater with a date. I
remember several disconnected things about it: The movie was much more
interesting than my date was, the music by Tangerine Dream was hypnotic
and fit the tone of the film, which struck me as being more depressing
in places than funny (although there are some funny moments in it), and
it gave me a glimpse into a world that I thought was fictional. It
turned out I hadn't experienced the world it was presenting yet. When
Cruise asks his friends what they plan to do with their lives, one's
answer is very simple and focused: "Make money". Another friend adds:
"Make a LOT of money".

It turns out the movie was precognizant of the next ten to twenty years
of American culture; the absolute obsession with making money through
any means necessary, legally or illegally, regardless of consequences
to yourself or others. Then taking that money and buying the things
that will make you happy: a porsche, a big house, and most importantly,
a hot babe in your bed, that will only be there as long as the money
is. Internally discovered happiness? A quaint notion created by the
poor who can't afford the toys that validate your existence.

I am sure that the filmmaker would be the first to say that the movie
parodies the hollowness of the "American Dream" of acquiring wealth to
buy creature comforts, but too much of the time it feels like it
celebrates them. At the end, the hooker stays Cruise's girlfriend only
as long as he continues to make her money; she even says "I'll be your
girlfriend…for a while". Real loyalty there. But then, she is a
hooker, and is being honest. She in fact is presented as the only
person in the film that is not a hypocrite. She has no illusions that
money & sex make the American world go 'round, and doesn't pretend
herself to be otherwise; unlike Cruise and the rest of his friends. In
the end however, she is still hollow, the values the kids pursue are
hollow (they are even after only sex, not love), and the movie feels as
deep and solid as a magazine ad for a lexus.

Even over the obsession of greed, however, the film illustrates the
complete alienation of the modern American teenage male: alone,
isolated, judged by his peers with the kind of car his dad lets him
drive, his clothes, and whether he can get laid or not. The emphasis is
on sex, not relationship. There is no rite of passage into adulthood,
no guidance from parents who more often than not are as distant from
their children as the cardboard cutout parents in this film.

In short, as depressing as this film is when you step back from it, it
paints a frighteningly accurate portrait of how superficial and narrow
a world, yet directionless (except for accumulating superficial wealth)
a young boy's world can be. There are no values taught in this film,
because there are none available as examples. And that is the
environment too many kids are subject to. That is what was so
disturbing to me about the film at the time I saw it, yet it took 20
years to understand why (as I was, like most kids my age, in the same
vacuous and bankrupt culture this kid was in at the time).

There are 300% more suicides committed by 14 year old boys in America
than any other age group or category. This movie explains why.

Seven stars, not for humor, but for photographing the beginning of an
era that lasts until this day. The message from Enron, WorldCom, Martha
Stewart and others for American kids will be: Don't get caught. A
message which is slowly becoming the only "moral direction" left in
American culture.