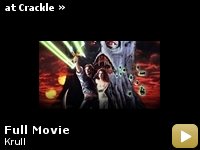 A prince and a fellowship of companions set out to rescue his bride from a fortress of alien invaders who have arrived on their home planet.

Widow of the Web

Taglines:
A world light-years beyond your imagination.

Frank Price, then-president of Columbia Pictures, determined that an unknown American actress would help state side ticket sales as opposed to an unknown English actress. With that logic in mind, Price met with Lysette Anthony and informed her that all of her dialogue had been dubbed by actress Lindsay Crouse. Anthony was totally unaware that her voice was to be dubbed prior to the meeting.

Revealing mistakes:
When Ynyr comes back from the widow of the web and declares "At sunrise the Black fortress will appear in the Iron desert!" he falls over. As he does so he damages the 'rock' he is standing on, revealing the polystyrene it's made from underneath.

Ynyr:
We all risk our lives on this journey. My risk is no greater than yours.

Why you MUST give Krull a second look.

'Fantasy', in the traditional 'Dungeons & Dragons' sense, in the movies is
often seen by the general public as a warning sign (and often rightly so).
On the surface, Krull does seem like standard fantasy cliche. Prince must
rescue princess from monster. Not very promising so far, is it? Already
starting to lose interest? YOU FOOLS! Consider these additional elements:
An orchestral soundtrack by the mighty James Horner (Titanic), which is
possibly the best score he has ever written, possibly even THE best score
ever written; A brilliant mostly-British cast, including Liam Neeson, Robbie
Coltrane, Tucker Jenkins 🙂 and a host of other distinguished actors; A
script which is so corny that it cannot fail to be fantastic when delivered
with such hammed-up enthusiasm by the actors; and finally a few brilliant
touches such as the boyhood-dream-weapon the Glave – a giant mind-controlled
shuriken. This film falls in to the same category as Flash Gordon which was
released a few years before – epic, brit-centric, totally entertaining
masterpieces of camp grandeur. Don't write it off until you've seen it
enough to appreciate its subtleties.