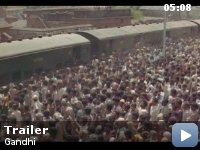 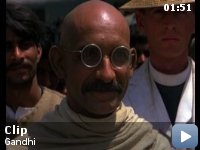 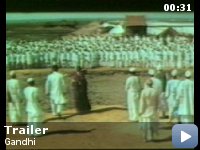 Biography of 'Mahatma Gandhi' , the lawyer who became the famed leader of the Indian revolts against the British rule through his philosophy of non-violent protest.

Storyline
In 1893, Gandhi is thrown off a South African train for being an Indian and traveling in a first class compartment. Gandhi realizes that the laws are biased against Indians and decides to start a non-violent protest campaign for the rights of all Indians in South Africa. After numerous arrests and the unwanted attention of the world, the government finally relents by recognizing rights for Indians, though not for the native blacks of South Africa. After this victory, Gandhi is invited back to India, where he is now considered something of a national hero. He is urged to take up the fight for India's independence from the British Empire. Gandhi agrees, and mounts a non-violent non-cooperation campaign of unprecedented scale, coordinating millions of Indians nationwide. There are some setbacks, such as violence against the protesters and Gandhi's occasional imprisonment. Nevertheless…

Richard Attenborough and his wife Sheila Sim owned a share of the rights in Britain's longest-running play "The Mousetrap" which they sold to fund the production of this movie.

Revealing mistakes:
In the massacre scene Gen. Dyer is pacing back and forth between the two rows of firing soldiers. Right before the cut to the crowd he steps in front of a standing soldier firing.

Hindu:
He will be saying prayers in the garden. Just follow the others.

"The object of this massive tribute died as he had always lived, without
wealth, without property, without official title or office. Mahatma
Gandhi
was not the commander of armies, nor the ruler of vast lands. He could
not
boast any scientific achievement or artistic gift. Yet men, governments,
dignitaries from all over the world, have joined hands today to pay homage
to the little brown man in the loin cloth, who led his country to
freedom."

This quote is from the funeral scene in the 1982 film "Gandhi". Richard
Attenborough directed this massive epic about the man that freed India.
The
film opens with Gandhi's assassination. The next scene, his funeral, is
one
of the greatest scenes in cinematic history. Attenborough managed to
recreate Gandhi's funeral on January 31st, 1981, the 33rd anniversary of
the
actual funeral. It is estimated that nearly 400,000 people were on hand
to
be a part of the filming the recreation. This film was made before CGI
(computer generated images), so the funeral scene is probably the last
live
action crowd of that magnitude that will ever be filmed.

Mahatma Gandhi's message of non-violent resistance is delivered in an
interesting and enthralling body of art. This film has made and will make
millions of people aware of the little brown man that took on the British
Empire and won. "Gandhi" serves both as entertainment and an important
historical record of one of the most important figures in history.

Ben Kingsley played Gandhi. He was the perfect for the role. He
resembled
the real Gandhi. He was young enough to portray Gandhi as a young man.
He
is a British actor that nailed the British influenced Indian accent. He
is
a wonderful actor that was patient and humble with such an important part.
And he was a relatively unknown actor at the time, so the "big-time actor"
persona did not get in the way of viewing the film. He did win both the
Academy Award and Golden Globe for best actor, for this role, which I
agree
he deserved. He became Gandhi.

The cinematography was outstanding. Attenborough filmed "Gandhi" on
location in India. The scenes of India are spectacular, and India is very
much another character in the film. This film is as much about India
itself
as it is about Gandhi. Attenborough shows the audience the people of
India
from its countryside to the vast city of Calcutta. It is suggested by
Kingsley, on the DVD, that Attenborough had a difficult time with the
elite
class in India at the time of filming. They were against the making of
such
a film by an Englishman. Undeterred by their negative thinking, he
persevered to enlist thousands of Indians to help make this film. Every
crowd scene, he used real Indians from the area. Attenborough also won
both
the Academy Award and Golden Globe for best direction.

This movie is a must see for everyone. It should be required viewing in
high schools, as part of History class. The fight against prejudice will
forever be relevant. It is also a beautiful work of art. This movie is
not
tainted by the embellishment of Hollywood (see "Pearl Harbor" for that).
Of
course, it would have been hard to screw up a movie about such a great
man.
10/10