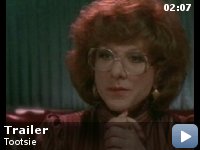 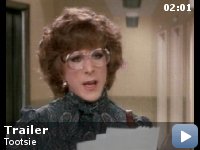 An unemployed actor with a reputation for being difficult disguises himself as a woman to get a role in a soap opera.

Storyline
Michael Dorsey is an unemployed actor with an impossible reputation. In order to find work and fund his friend's play he dresses as a woman, Dorothy Michaels, and lands the part in a daytime drama. Dorsey loses himself in this woman role and essentially becomes Dorothy Michaels, captivating women all around the city and inspiring them to break free from the control of men and become more like Dorsey's initial identity. This newfound role, however, lands Dorsey in a hot spot between a female friend/'lover,' a female co-star he falls in love with, that co-star's father who falls in love with him, and a male co-star who yearns for his affection.

Continuity:
In the scene where George Fields and Michael Dorsey are arguing in George's office about Michael's being difficult to work with, the pen in George's hand and on his desk disappears between scene cuts consistently.


Michael, an unemployed actor in New York, takes desperate measures by
dressing up as a woman called Dorothy Michaels and gets a job at an TV
soap opera, where he falls in love with Julie. But how to tell her that
he is actually a man…?


Winner of 3 Golden Globes ( Best movie comedy/musical, best actors
Dustin Hoffman and Jessica Lange ) and one Oscar ( Best actress Jessica
Lange ), "Tootsie" is a small masterpiece of intelligent comedy, full
of emotions, love and interesting observations about the relationship
between women and men.

The situations are deliciously written. Just take the scene where
Dorothy is auditioning for the role in the TV soap opera but is turned
down because she is "too soft". Her response is gold: "Yes, I know what
you want! You want some gross caricature of a woman to prove some
idiotic point, like power makes women masculine, or masculine women are
ugly…! Well, shame on you, you macho sh*t a**!" When later asked from
the producer if she was just acting when she said that or if she was
natural, she responded: "Which answer will get me the job?" Needless to
say she got the job that instant, and a special place in my heart. But
the best scenes are the ones where Dorothy is constantly improvising on
the set, like when she was supposed to say to a woman who was beaten up
by her man to take a therapy, but instead decided to tell that she
would never let a man raise his hand on her( and then she threw a vase
of flowers into the wall! ). Wonderful fun! Billy Wilder would be
proud!

Dustin Hoffman is pure genius, more as a woman then as a man, as are
Terri Garr and Bill Murray, before his critical fame with "Lost in
translation" and "Broken flowers". "Tootsie" is quite simply a classic
all the way through!