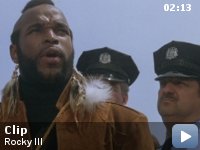 When Rocky is defeated by a brutal challenger, Apollo Creed offers to retrain him in order to regain his fighting spirit.

Storyline
Boxer Rocky Balboa enjoys the wealth he has as world-champion. He only fights against opponents "hand-picked" by his manager Mickey Goldmill. Then he is challenged by the arrogant Clubber Lang. Rocky accepts the challenge to prove once more that there is only one world-champion. But Lang wins and becomes the new champion. Nobody believes in Rocky anymore, except for one man: former world-champion Apollo Creed. As Creed tries to stimulate his fighting spirit and get Rocky back in top-form, it is now up to Rocky to get his edge back. Will he win ?

Taglines:
A Fighter. A Lover. A Legend. The Greatest Challenge.

In the scene where Rocky body-slams Thunderlips out of the ring, Sylvester Stallone admitted that he couldn't dead-lift Hulk Hogan so he had Hogan jump into his arms.

Paulie:
[Thunderlips is walking to the ring]
Why are they carrying him?

Clearly the most entertaining of the Rocky films due to its perfect pacing
and well-choreographed matches. Stallone is at his best when playing
Rocky–it is his vision and his creation–and, despite what Hollywood wants
us to think, he is not a bad director either.

What he masters are "subtleties" (my term): certain facial expressions or
small actions/reactions at perhaps less-than-pivotal moments which reveal
his skill. They need to be really looked for to be seen, which is why only
those who without the ability to look deeper than the surface find him so
mediocre.

I don't want to give them all away, but here's one example of a subtlety
that shows just how human he can make his characters (especially Rocky): in
this film, in the break between the end of Round 2 and the beginning of
Round 3, he is sitting in his corner getting a mouthful from Apollo. An
assistant starts to spray something in his face (probably something to
coagulate the blood, I don't know), but Rocky, who is focused intently on
Apollo's furious coaching, opens his mouth as if he is expecting water to be
sprayed in. He suddenly flinches in disgust as the spray goes in his mouth
and stings his face. It's just a tiny tiny humorous moment that speaks
loudly about attention to detail.

Or how about in Rocky 2, at the beginning of the match when they meet in the
center of the ring and Apollo starts making his bravado-laden threats, we
see Rocky just sort of nod and half-smile at him politely, then next you see
a side-on shot of him turning to walk back to his corner, and the look on
his face says "What a prick." Priceless.

I'm not a fan of boxing, or the first Rocky movie (too slow), or the last
Rocky movie (huh?), but this one is extremely enjoyable for me to watch as a
human being who faces challenges just like anyone else, and who needs that
occasional inspiration to give me a dose of determination to overcome
them.